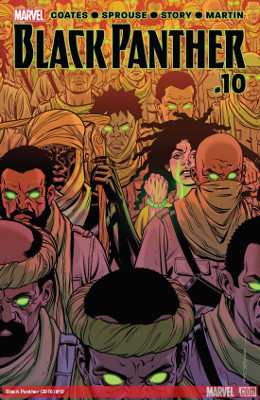 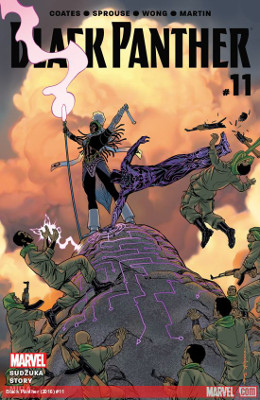 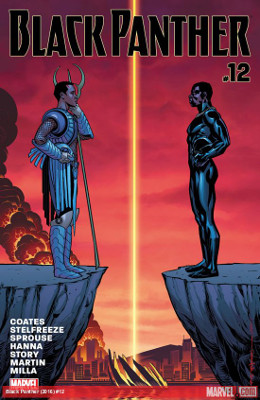 This issue feels like a step back in T’Challa’s story. Not because the plot isn’t moving forward or the direction is bad. But from a technical standpoint.

Marvel does what they do when they give up on a series succeeding: they don’t care about the art. Here we have layout by Sprouse and the rest by Story. It’s not that their art styles don’t match. It’s that there isn’t a lot of soul in this. It feels paint-by-numbers. Skilled paint-by-numbers. But phoned in.

Coates’ writing is too much. Too much text for a comic book. Too much exposition. The words aren’t tightened enough. As someone else who’s a long-form essayist, as I’ve discovered about myself, editors are our friends. (In fact, these comic books reviews are the only continuously shortest writing I do.) Changamire’s and T’Challa’s conversation needed that edit.

I don’t buy Shuri immediately changing Ayo and Aneka’s minds. Seems like they’d still want to rebel, but to give the land back to the women. I do think they’ve always seen Tetu as part of the problem, even if they were negotiating with him.

I did appreciate Changamire’s insistence on seeing Ramonda. Who we haven’t seen since she was hurt.

Nothing like the penultimate issue to a long story arc with 10 zillion artists. Go, DC, go! (If you cannot tell, that is extreme sarcasm. Uneven art makes for uneven storytelling when comic books are a visual medium told with BOTH words and pictures.)

This ending was rather predictable. I think that’s both good and bad. I’m not sure Coates has figured out what to do with kingdoms versus democracies and the historical and mystical nature of Wakanda. Changamire — who I don’t think I’ve pointed out his on-the-nose name — and Coates as author seem incredibly focused on the people aspect and how to run a country ethically. Shuri and now the ancestors who fight with T’Challa and company to defeat Tetu and Zenzi are supposed to be the embodiment of the mystical portion. However, I feel that Coates skips over addressing the mystical when it comes to country running. Which, in our real world, religion and state should be separate, but our world is not magical. And I’m not even saying Coates is wrong to want Wakanda to have more ethical rule and go against the idea of a mystically chosen king — all that is fine, and I agree — but it seems skimmed around. It is both at the center and the edges of everything happening in this book.

Tetu and Zenzi both seem to have powers arriving from the aether of their countries, of this mystical Africa, that only get used to control the minds of soldiers for their army. How are they false rulers when essentially Shuri and T’Challa rule by the same mystical rules?

Shuri does ask some of these questions in the very last scene. Or at least she seems to be addressing the mystical, not the direct physical confrontation. What Changamire desires is still not there, because T’Challa and Tetu are asking the Wakandan peoples to choose between them, to choose between two parties who believe themselves to be the superior, mystically blessed rulers.

First, it always says something about me that I love an issue where everyone’s talking about their problems and trying to solve really complex issues. Here we get tons more of Coates’ thinking around what it means to be a king and Wakandan politics.

Aneka’s realization that a king must meet his people, not the other way around (which is to rule by fear and be authoritarian) is incredibly powerful. And it fills my heart with glee that it’s Aneka, not the others who realizes this. The entire scene with her, Changamire, and the others around the dinner table is perhaps the most powerful one.

That and T’Challa pointing out that there are many democracies in other parts of the world where there is a king and a government run by the people with elected officials. (Sidebar, this is what I always think about when my fellow Americans get scared about single payer healthcare. There are so many other nations doing it, who have both cheaper healthcare and better healthcare. Like we are not inventing the wheel here, nor is there a need to fully reinvent it.)

Ramonda, on the other hand, she is not happy with this. As much as I’m sure Shuri and T’Challa don’t want their mom to be injured, having their mom down for the count is to their benefit if she’s not fully onboard. She has throughout this book been the voice of the royals. Been the benevolent ruler, who truly does believe that their family knows how to better take care of Wakandans than Wakandans do for themselves.

You can see why Ramonda and Changamire’s relationship fell apart for more reasons than their social class.

I’m kind of okay that Zenzi got away. Of course, this leaves us with an open villain for more stories. It looks like she’s hooked up with Stane again, when you’d think she’d leave that shit far behind. I’d rather like to see her work to fix her own country, and then be like “yo, Wakandans, you want to stabilize our countries together.”

Or maybe some Ororo and T’Challa love.