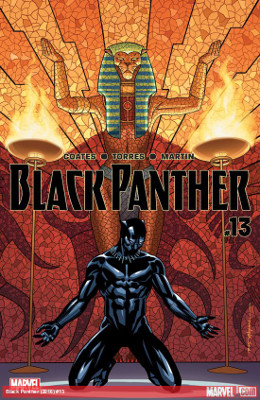 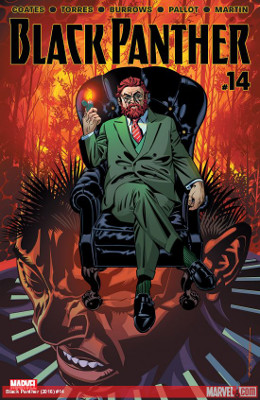 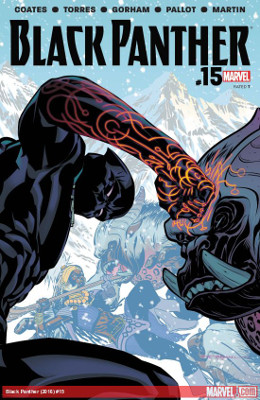 I’ll backpedal a bit here — I’ve been critiquing this book for not dealing that much with the spiritual kingship of Wakanda, and this is what Coates is doing in this issue. And it seems like the spiritual will be our next arc.

I also felt that Marvel was giving up on this book, due to changing artists, but it appears (for the moment) that this title will continue. I still don’t think we should have three artists on one issue. I’m okay with it changing from issue to issue, especially if Coates can showcase more black artists and get them work.

I loved T’Challa’s conversation with Ororo. Everything about them. Torres’ art is just lovely. The shapes, the looks, the body language. It reminded me all of a very well-directed film. Can I just have more of this until the end of time?

“Silly king, I need no religion.” — I died. Can we just put this in the future Black Panther movie?

Ororo’s wisdom when T’Challa asked her about her time as a goddess was incredible.

While the explanation of Wakandan orishas was a little exposition-y, I’m glad I didn’t have to Wikipedia. And Torres put in some interested design elements into how they are portrayed. He borrows both from Egyptian and technological themes, which is a nice mix for Wakanda. I’d love to read more from Coates and Torres about these choices as I’m sure I’m missing a lot.

The Snake-Men are freaky, but they can’t vanish them without also hurting or killing the priests. Shuri’s missing knowledge probably holds the key.

My heart is just not in this comic book. It’s not there every time we get deep into Black Panther history or when there’s superheroing to be had. T’Challa himself doesn’t draw me in as as character. I feel like I’m getting teased with the editor’s note about Ayo and Aneka being back in the next issue. (I do love them.)

Dr. Faustus is not a favorite of mine. I’m not sure how Zenzi needs his powers beyond his money.

Time to read Wikipedia about Asira.

The elder ghosts are sure surly with T’Challa. It’s unsurprising to see his father and grandfather be the ones with the most empathy toward him due to remaining love. It does feel weird that I don’t recall seeing the ghost council before.

Zawavari is another character who doesn’t strike my fancy. I’m never into ancient characters in Marvel or DC. (I notoriously hate the Watchers.)

I connected more with this issue, and it’s for sure because Shuri, Ororo, Ayo, and Aneka are back in the picture. T’Challa is still not one that I’m connecting with. It’s these women.

I’m also always more of a fan of winter fights. But the listing off of all the creatures and the different areas they were attacking were just terrible exposition. At least, Coates knows better than to make Zawavari a complete deus ex machina. He shuts one gate, and then he ends up in a coma.

We do need more explanation of who Suri has become. She’s basically had no arcs since she got back from being kind of dead but not really. It’d be nice for her to have some growth.

All this stuff in Wakanda is interesting philosophically. However, I’d really love a comic just about Ororo and T’Challa’s relationship with each other. It was nice to see him apologize to her. She deserves it. Especially if Ororo’s going to actually save the day.