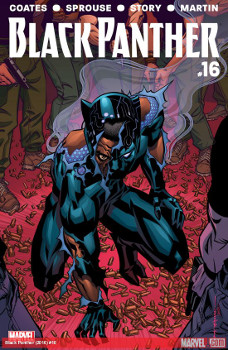 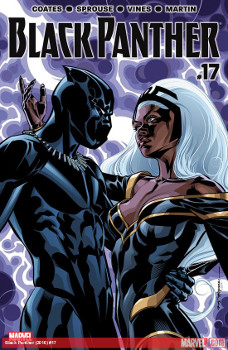 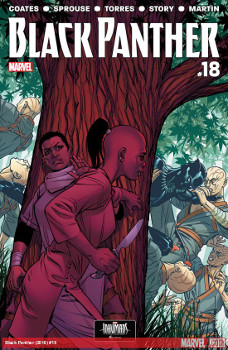 The best part is Storm. The best of any comic book will likely be Storm. Sorry, all other characters. Here both Sprouse’s layouts and design shine along with Coates’ writing.

I also appreciated Ramonda giving T’Challa crap about how he’s still a little in love with Ororo. Who isn’t? That’s a better question. Ramonda seems to have lightened up a bit in mood. Maybe having Shuri back is all she really wanted.

Given that Ramonda went against T’Challa and has been pro-monarchy this whole time, I’m kind of surprised that T’Challa told the council that his mother’s word was like his own. I feel as if there’s some familial resolution in this statement that Coates hasn’t shown us.

I’m still a bit confused about what’s going on in New York City as this is part of Black Panther’s history that I know nothing about. I don’t even recognize any of these villains except Thunderball. Those Nazi twins similarly don’t ring a bell, but their very modern and “respectable” look by Sprouse was well done.

T’Challa giving Thunderball another chance was a great scene. Especially since we saw him conflicted earlier. It shows threads of community, and also the acknowledgement that there are villains for hire in the same way there are heroes for hire and it’s sometimes only a slight difference between the two. (Which okay, I know, another book, right.)

I seriously cannot wait to see what’s in store for Storm and her uncontrollable and possibly evil storm.

I really love what Ororo discovers at the end of the book. That she’s interested in the privilege to serve the people, and that they are not a burden. I feel that it took like the first several volumes of this series for T’Challa to get any kind of clarity around his feelings about the Wakandans.

This is also why Ororo is the best.

And I’m totally here and for the flirting between T’Challa and Ororo. Especially how he’s continually confessing how much he loves her, and she’s like “I know.”

I am disappointed in the cover by Laura Martin and Andrew Crossley. Ororo is in one of her many sexy Storm costumes, whereas in the book, she’s just in white pants and a black long sleeve shirt. So much more comfortable and practical. Also sexier.

The idea that Tetu caused never ending rains was pretty great. To see how his “relief” of the drought is just as bad of a solution.

We will see who this Sefako is.

I felt way too proud of myself about knowing the Anansi would be spider creatures. (Thanks, American Gods.) I thought it was very smart of Coates to draw the story down to, yes, the region’s leader; his story wasn’t just about the Anansi at large, but of the direct kidnapping of his daughter.

The psychic attack was another moment that Coates excelled at bringing the story back in. Fight scenes with so many characters can quickly get out of control. Loved Ororo’s response that she was trained by one of the most powerful telepaths in the world.

This was almost a perfect issue. Except for the opening where Ayo and Aneka seduce a couple of men in order to get security clearance passes off them. I just want more nuanced stories for them. Though I am glad to see T’Challa and them being able to work together. Even if they were obviously being set up…

Shuri and T’Challa teaming up together also worked really well. They both have strengths the other does not have. It makes sense there would be some super villains behind the upheaval (especially the big immediate threats, instead of creeping threats), and it was nice to see them discover it together.

Shuri’s powers are a nice compliment to T’Challa’s, if he can’t have Akilli and the others with him at every turn. As T’Challa is building his community, he does need to bring his community (or at least the trained ones) with him.

The two-headed Orc creatures were a little too Lord of the Rings and less Orisha or Originators.