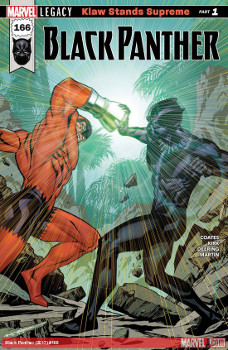 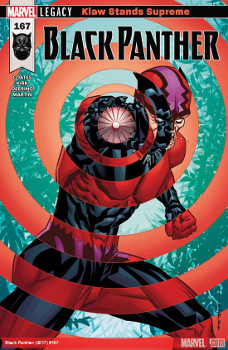 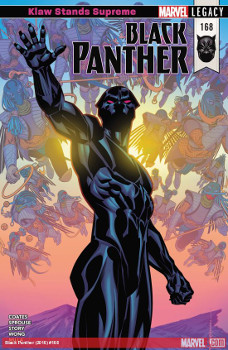 I see and appreciate what Coates was trying to do with this book. He does a great job at showing the humanity of his villains. They aren’t evil or good. Their actions currently are evil, and that’s what makes them the villains. But they have been wronged, they have been abused, they have their own reasons and stories.

You feel for the Klaw. Or at least the kid the Klaw once was. The one who was abused by his father and watched his sister also be abused. They both may have heard voices — and the Klaw’s may be related to his powers — but his parents put Julia in a mental hospital and had her lobotomized.

The Klaw seeks a way to revive his sister. And to become a god. That’s where things fall apart. Same with his insights into the others and who they are now are villains.

Not sure how I feel about this issue. I’m still not sure about Shuri’s powers. (And I really loved the version of her in the Black Panther, so it was a little jarring to jump back into the comic book.)

I would hope that Coates could tell us another story about Wakanada’s origins. About a people who could get along with the Originators. About something besides destruction and conquering. Something not incarceration, enslavement, and exile.

I get that Coates is deconstructing Wakanda as a nation. Taking down the kingship, then the Orishas (religion), now the ancient history (mythos). I know it’s hard to see a different story when this is all we’ve seen. When this is all our history tells us happens again and again in this world. It reminds me of watching old Doctor Who, and every conflict was the Cold War, over and over. I mean, I suppose that there could’ve been another extinction event to wipe them out. I do wonder where the Originators have been all these years.

The parts with Dr. Franklin and the conversations with him and about him that Shuri and T’Challa have, those were the best. Especially when T’Challa talks about how he needs to delegate as a king. LOL.

T’Challa doesn’t seem to be that many steps ahead of his enemies. Or at least I’m not seeing the full plan that Ramonda does. I’m still trying to uncover exactly what I’m missing in these books. Maybe it’s because superheroes are generally supposed to be hopeful, and maybe Coates’ cynical instincts just keep popping up.

I cannot tell if these are the real Originators or the ones that the Klaw made. I think these lake/desert ones are the real ones.

Eden was really upset. Of course, I’m still unsure what Shuri can do, is doing, and what her characterization is supposed to be.

Are those Midnight Angel suits or Midnight Angel robots? Maybe I’m just thinking robots as I’ve been reading the Wonder Woman/Bionic Woman crossover with its fembots.

I do feel that we’re starting to see the influence of the Black Panther film in this issue. The tech matches more of director Ryan Coogler’s vision than what we’ve seen before in Coates’ story. I’m all for more technology and that sort of sci-fi inspiration. Especially as we dive into the mythos of Wakanda.