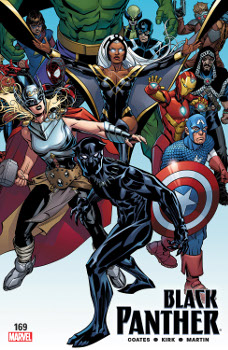 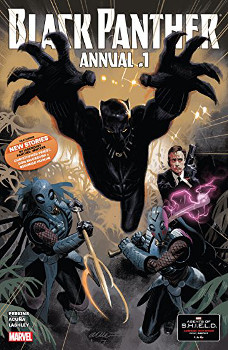 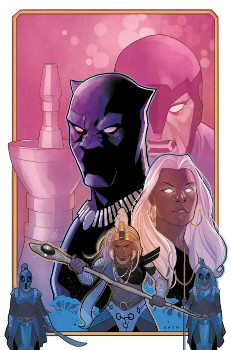 Overall, I didn’t find this a very well-executed issue. Or perhaps, we’d just been spoiled that the Midnight Angels were on their way. Harm against Aneke and Ayo seems like a cheap play at my emotions too. Especially with a threat of sexual assault.

Though it was pretty rad to see Aneke and Ayo save themselves. Someone finally needed to beat Zenzi, and it’s nice that she’s beat by women. Always a fan when Doctor Faust fails.

I’m not sure what Klaw was doing. Not sure how this is bringing back his sister. The mythology is a bit confusing here. This could be because I did go quite a while without reading additional issues in this book.

The pacing of this story was everywhere. It relied on flashbacks, but the sense of time and timing was busted. I got confused. I went back. I fumbled onward. It felt like a chore to read.

Of course, I also don’t care about Agent Ross. Even if I do think Priest was trying to say that he was lazy and didn’t really care what other members of the government were doing.

Malice’s design was cool, until I could almost see her ass. Between the art, the pacing, and the tightly done references, this sadly reminded me a lot about what I don’t like about comics and how they can feel like a wall in front of your face instead of a welcoming place.

All of those two stars are for Acuña’s art. His art remains gorgeous and lush. He knows how to convey emotions and personality. Even though T’Challa is mostly in the panther suit, which covers most of his face, you see his determination and his grief. We don’t need to be told that this mission is sacred to him. It’s all there on the page.

Unfortunately, McGregor decided to tell, not show. The exposition was clunky. He does the opposite of what Priest did earlier. Priest presented a comic where we were supposed to know the inner-workings of everything Black Panther, while McGregor assumed he needed to explain everything. I kind of wished a woman would’ve written this story.

A different kind of telling, not showing here. In fact, there is really no plot here, but a telling of what the future might be and how Black Panther becomes the ruler of the world.

It was nice to see a utopia, for once, in the future for superhero comic books. It was nice too to see T’Challa with a happy and thriving family, where he could marry Ororo and have children and grandchildren. Where they could even help mutants escape oppression.

But there is not a story here. Only a sketch.

The signal is coming from within the house. I do like this twist. I don’t know much about Asira, and I’m curious to see how this develops. Though T’Challa seems to be pretty relentless in his protection of Wakanda no matter who the person attacking it is.

In a battle mixing magic and superpowers, Ororo is going to be your best bet. I love how she just comes in and cleans house. There’s this awe and reverence that both T’Challa and Coates himself gives her in the text.

Kirk draws Tetu very harshly. He’s all super lines and edges, which stands in stark contrast to Changamire, who’s very round and grandfatherly. Young rebellion and old wisdom? Though here Tetu has more of the puzzle pieces than Changamire, or T’Challa, know about.

The battles scenes are too long for me. There is too much going on. As much as I’m glad to see both Shuri and Ororo as the main powerful heroes, I’m just not interested in these types of huge battles, and I don’t think Kirk’s pencils lend themselves to depicting them in a clear way. Nor does Coates’ writing. Battles scenes are a skill, and it’s just not here. Which is fine because the rest of this book is much better.