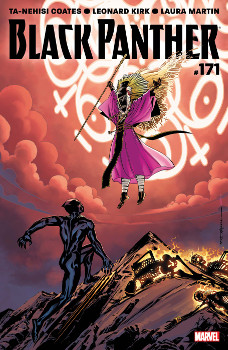 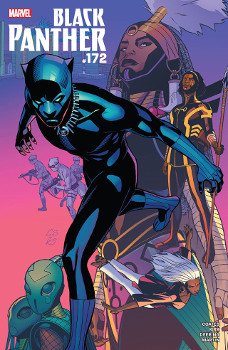 Huh. I’m not sure about this resolution to so many plot points in one issue.

Watching T’Challa disintegrate Klaw didn’t seem extra special. Given that Klaw was responsible for T’Chaka’s death, you’d think there would’ve been more dramatic, or even meaningful to T’Challa. I do think Black Panther doesn’t get close enough to T’Challa and his inner workings. He isn’t a flashy character, but it would be nice to have an introverted character centered here.

The other characters support this book in a way that a main character should. We get the parts with the land here. We understand more about the soul of Wakanda than we do about T’Challa. Sure, it’s a metaphor in here, but I just want more of T’Challa. Maybe some smaller stakes.

We still kind of don’t know what’s going on with Shuri. There’s a Shuri comic book now, so that’s great. But she just magics everything now.

And Asira… I don’t know what to think about her. Or the Adversary.

What an odd ending… I know that Black Panther continues, with a small number reboot, under Coates’ control, and this stoppage in numbers mostly has to do with Marvel’s continued push-and-pull of not wanting numbers to get too high and too confusing for “new” fans.

I say this is odd as this started out as a meditation on kings and queens and legitimacy or de-legitimacy of royalty. Coates’ general premise was royalty is bullshit compared to rule by the people — even if the king is a good guy like T’Challa. However, we end this story with being saved by a queen, by a goddess.

This gives me several mixed signals.

Even if I love Storm. Even if I do love T’Challa choosing her over and over again. I’m a shipper too, Coates.

But, at the end of the day, it’s not the people who fight the Adversary and win. No, it’s a goddess. It’s someone who is plucked out as special, as some kind of better than others, no matter how mutants may be discriminated against or how Storm isn’t a Wakandan.

Seems like an easy ending to the book’s storyline.