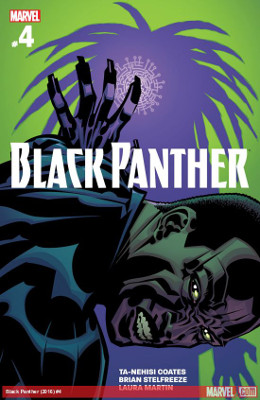 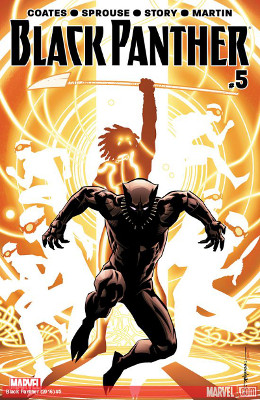 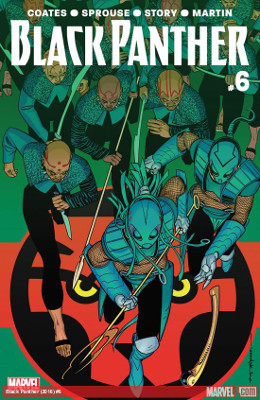 This is the best issue of the series so far because it’s less about the pontification of Wakanda’s past and more about the future. And more about the direction of this book. Plus, more showing of the characters’ motivations, instead of folklore/histories and intentions.

Ramonda wins in this issue. (Even if she does get gravely injured by the end.) I loved her scene with Changamire. Especially when you find out that they used to hook up. I love what Ramonda says about choosing to be a queen and ending her affair with Changamire, even if they were in love.

This side mention allowed for greater depths into Ramonda’s lectures to T’Challa about his own responsibilities and what he has and hasn’t lost.

Ezekiel Stane is an interesting choice. Especially given how he represents white male privilege and Western influence in this book. It doesn’t seem like Tetu and Zenzi need him.

Too bad we don’t know someone who could identify that tech. Someone you were on the Avengers with, T’Challa. Has a similar chest thing. Iron something? Iron Man. Call Iron Man to run that villain check.

(Though I did really love that run of Invincible Iron Man so exciting to see a character from it back.)

My big book prediction: this book ends with a Wakandan democracy. There’s a clear tension in how Coates writes T’Challa as a king, and I don’t think it’s just T’Challa second guessing himself as terrorists attack his country. I really think part of it is Coates grappling with the idea of kinghood and good governance.

Or as Winston Churchill put it, “No one pretends that democracy is perfect or all-wise. Indeed, it has been said that democracy is the worst form of government, except all those other forms that have been tried from time to time.”

Though we do have a pretty heavy time with the gods and Shuri. I took a deep breath and hoped it was okay to just get the metaphor/lesson.

Calling those “security” experts was a terrible idea. Why did T’Challa do it? It’s even worse that the edited video’s being used to discredit him. (Also pretty sure Stelfreeze drew that evil guy who died to look like Trump.)

I feel that the story here is finally coming together. Though I don’t get why the Midnight Angels would team up with Tetu and Zenzi, except that they don’t know about Ezekiel and how much of the country he’d been promised to rule. Now that’s not very democratic.

It’s very clear that T’Challa must be the one to give the nation back to his people. Otherwise, none of this is going to work. Especially when Hatut Zeraze have had a change of heart.

Nice to see T’Challa taking my advice and calling that Iron Man guy. Though I appreciate that it’s all black superheroes who show up at the end to help T’Challa with Ezekiel, Tetu, and Zenzi.

The storyline with Shuri was probably my favorite so far of the fables. I like what it said about the power of African women and also how we humans never stop longing for the light, no matter how oppressed (or repressed).

Of course, T’Challa allowed himself to be captured. There was no way he was going down in battle that quickly.