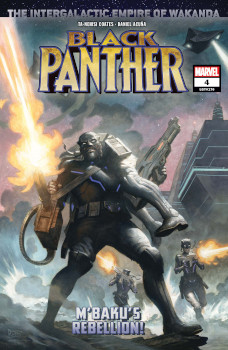 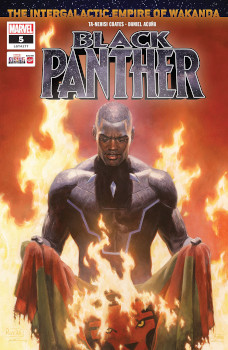 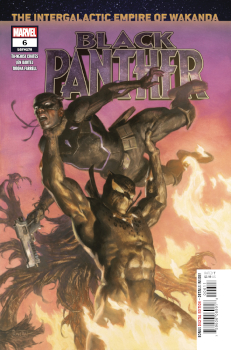 The hit or miss nature of Coates’ Black Panther run strikes again. This one is a miss for me.

The attack on the Maroons by Galatic Empire and Manifold continues. We don’t understand Manifold’s power quite yet. T’Challa has a moment of recognition, and perhaps this is the Manifold he knew, but also there could be another one the way that T’Challa is a popular name.

This issue mostly seemed to get to points about T’Challa’s enhanced fighting abilities and also N’Yami’s death. Now M’Baku’s in charge of the Maroons, and if Black Panther history tells us anything, there will probably be a challenge by T’Challa to his rule.

Coates’ note about how only the Nameless can be the leader of the Maroons is an interesting commentary on power and how to center and empower the most disenfranchised in your community. Unfortunately, it’s just a moment.

Acuña’s art didn’t have the same flow and grace through the battle as the previous issue. He’s never producing substandard art by any means. It just didn’t work as strongly here.

I guess from a realistic storytelling point-of-view having the Maroons rest for five years makes sense to build up their forces. It makes sense in ways that say the population of the Rebellion in Star Wars does not.

However, it does cheapen the writing a bit. There is a lot of relationship growth that happens off-screen, and shortcuts for emotional attachments that Coates wants us to go along with. Particular the growth of mutual attraction between Nakia and T’Challa, but also Nakia’s decision that he’s too in love with the ghost of Storm for them to be together. He remains haunted by her. But none of this has been earned, even if no one wanted five years worth of comic books of them hiding in wintery mountains that resemble where the Jabari Tribe live.

Also not earned was T’Challa’s reckless behavior and seeking death through sport and thrill.

In many ways, Acuña’s art does remind me a lot of Star Wars. Like these characters could be transported into the Star Wars universe, and they’d fit with only very minor adjustments needed. Even their technology seems on par.

I’m surprised it took Nakia five years to show T’Challa N’Yami’s video where she declares that he is the hero of myth and their past come to life. Especially if Nakia and T’Challa had this romance.

I guessed wrong about a fight for power between M’Baku and T’Challa. Which I’m okay with. The recent attack from the Askari is but an excuse for the Maroons to start their proactive attacks again.

I always do love some art from Bartel, and she never fails when she has to draw some gods. The way she had Bast morph from woman to panther was incredible. The details of Bast’s panther face were magical.

I am, however, confused. It was my understanding that this galactic empire had always been evil: that the oppression of the Nameless and the destruction and subjugation of worlds was par for the course. That N’Jadaka was in a long line of cruel rulers, even if he has the added power of the Klyntar. Here, a lot is being implied that he’s made it worse and that the significant colonialism started with him and the Klyntar.

While N’Jadaka naturally seeks power wherever he can find it, it is also unclear how much of what he does is influenced by the Klyntar.

Bast was a fool in her actions. Though I did appreciate the moments of explanation about how the Orisha left Wakanda Prime, which keeps this book in line with the rest of Coates’ Black Panther run.