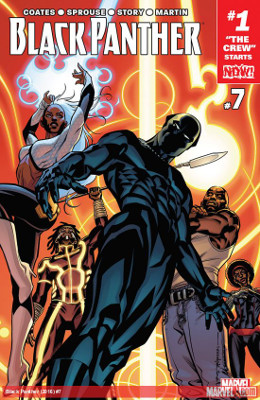 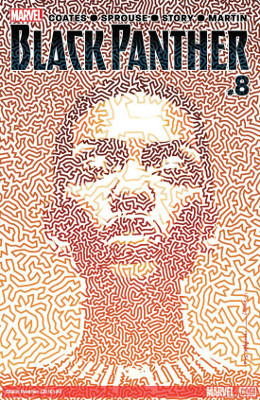 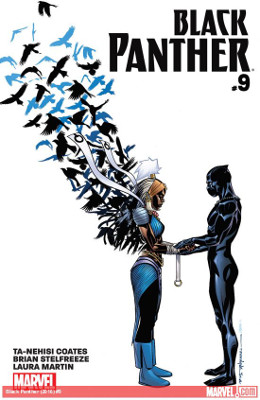 This issue certainly paid off. It played all the elements Coates was building on and delivered. You can’t ask for anything more than that.

I don’t know much about Manifold (except what I’ve read here), but I’ll certainly take any comic with Luke Cage, Misty Knight, and Storm. Luke’s and Misty’s banter was pretty great.

Shuri’s lessons continue to be interesting. I’m not sure what she learned from the cheetah story, except that she perhaps has to run on her own.

My favorite part by far was Changamire’s confrontation with Tetu and Zenzi. He certainly sees how they are getting played. But he also sees how his own philosophy and not taking a more active role in the revolution has allowed what he’s written and lectured on to be twisted. This is, of course, what happens to any author when their words go out into the world. And something I’m sure Coates struggles with himself.

This was a nice payoff, and it was a nice blending of Wakanada’s superheroes, mystic/spiritual, and technology. Coates has been working hard to put this story’s pieces together well.

I loved T’Challa thanking the Crew, but also telling them why they couldn’t stay. There was a nice little nod to T’Challa and Ororo still having feelings for each other, but it not working. I feel like it’s a kind of adult decision about relationships that too often is left unexplored in our media, so when it happens in our lives, we have no examples of how to proceed or outsiders find it extra puzzling.

Shuri being the Aja-Adanna, Keeper of Wakandan Lore, is pretty awesome. I’m looking forward to seeing what happens with this. And also what she will advise her brother to do. No doubt, the people are going to be excited that she’s back. (Though they may also see the elitism in her being brought back to life when many of their family and friends have been killed in the Wakandan unrest.)

I’m also interested in the next part to get to know Eden a little better. It seems like he’ll be sticking around.

Everything in this book is incredibly cerebral. This is all the philosophy that Coates has been tossing around in the book. Here it is solidified.

Changamire has inspired a revolution. Though he refuses to be their voice. He refuses to participate in what he has advocated for. He is those who call for revolution, but back down when the mess of revolution actually happens. Though you can argue his revolutionary words were twisted. It makes sense that T’Challa, Shuri, and the rest of the government would argue about what to do with him. (No doubt if Tetu and Zenzi’s revolution does make it to the Golden City, they will also consider what to do with him. They may not be as nice.)

Here T’Challa and Shuri are arguing about the future of Wakanda and what it means to have royality. T’Challa is unsure. Shuri is more sure that it’s their birthright. No doubt her recent experience and transformation plays into the fate aspect of her royal birthright.

Tetu and Zenzi see themselves as an oppressed people. Tetu is not concerned with the means that will bring his revolution. Though he seems content to set himself up as ruler. He also has his own birthright. He realizes he needed allies, but he will betray the Midnight Angels.

The Midnight Angels have their own agenda rooted in the matriarchy. They want to protect women and children. In a way, they remind me a lot of Wonder Woman and the Amazons. Even Aneka and Ayo do not agree about if they should build an alliance with Tetu and Zenzi. They do have to shake their training, which Aneka has had more of. Then Shuri appears.