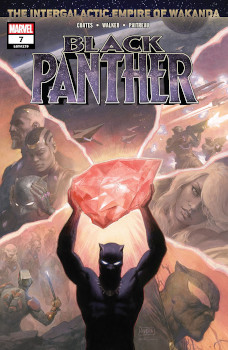 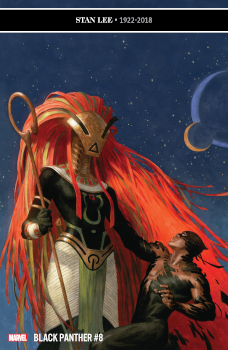 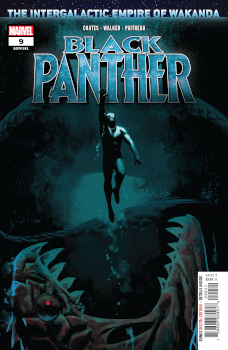 So Coates is really transferring his entire character vision for his first run into his Star Wars universe. They could defeat N’Jadaka, or they could just wait until his daughter Zenzi does. Or uses Manifold. Also, this could go to a very dark place, but also Coates doesn’t have a track record with women characters, so it probably won’t.

That said, I am glad that we’re seeing more of N’Jadaka besides his quests for power and menacing evil empire leading. Maybe this will be a little more complex than a morality tale for a six-year-old (Star Wars).

Nakia is the best. Walker did a great job with changing her just enough, but we could still tell it was her. I always appreciate an artist who knows how to draw faces.

The idea of this Archive is interesting. It seems to me that the empire needs both ways to destroy people who have knowledge (the Nameless) and ways to archive the knowledge of their scientists and leaders without stopping them from continuing their empirical functions.

Mixed on how I feel about M’Baku raging about the empire, but then also saying they’re going to wipe Kofi’s mind in the same way the empire wiped the Nameless’ minds.

When T’Challa finds all the people aboard the ship — the ones who will be turned into Nameless, but haven’t had their memories wiped — the art made me think they were just heads in boxes. Especially with the talk of the Archive, I wondered if maybe the empire could preserve just heads before downloading memories. (Of course, then they wouldn’t have slave’s bodies for work.) Not great art from Walker in that scene.

Of course, T’Challa cannot leave people in danger. Especially when they recognize him as their savior figure. It’s also a way for Coates to distinguish the type of leader (good) that T’Challa will be compared to N’Jadaka.

In many ways, Coates plays the philosopher in this issue. The one that Nakia says they don’t have time to be. Here are their choices, and T’Challa may put them all at risk to rescue these people.

I did enjoy Walker’s closeups of T’Challa’s face. He has a certain gruff to him that I’m not sure I’ve seen with other artists. It particularly suits this story.

Things I liked: meeting N’Yami’s people and them challenging the assumptions about their cooperation with their oppressors. I appreciated that Coates was telling a different story: a story of survival and one of hidden cultural treasures. They sacrificed themselves to keep their memories and protect the last Jengu.

What I don’t like: having to keep track of too many characters. Half the time, I forget who is where and what is happening. I know there’s a wall of text in the back of these books to help out, but a wall of text in a comic book has never been appealing to me, especially when it reads like a dry D&D manual.

I wanted more under the sea action, character development, and playing around with Nakia and T’Chall’s dynamic. This book has promise, but isn’t delivering for me.