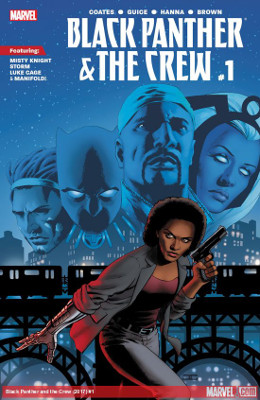 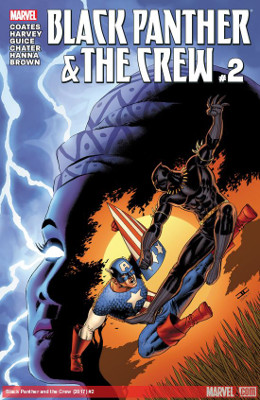 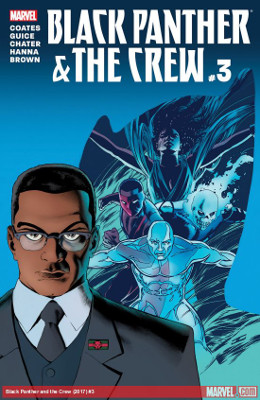 While Coates does a great job at setting up the different dichotomies between Misty’s world of Harlem, being a black person in America, being a cop, and being a superhero, I’m not quite hearing Misty’s voice yet. Misty may doubt the systems around her, but she always knows who she is. I’m not sure who Coates’ Misty is.

I do like the setup that Misty isn’t on anyone’s side, but the truth. Here, here is where Coates needs to dig in.

Loved this idea of an alternative history Harlem. About a group of black superheroes who took care of their neighborhood before civil rights or at least working to take down fedora wearing gangsters. How Misty, and the other cops, failed to connect the Lynx and Ezra. It fits right into the idea of the superhero with the secret identity.

It also gives Coates new characters to play with in his universe. (Of course, with Coates’ love of Black Panther history, this could be backstory that I don’t know about.)

Guice’s artist choice of how and when to show Misty’s metal arm and hand were interesting. I wonder if we’ll continue to see her hid it except during superhero times.

I think I’ve been avoiding reviewing this book ever since the reviews and panels came out about Misty knocking intersectional identities. It reads false, and as if Coates is snapping back at some of critics around Between the World and Me. (Which plenty of black women critics, who are far more qualified than I, have spoke out on lack of women there.) Or as a critic of the application of intersectionality in the “real” world. I do think intersectionality has been muddled by the current state of propaganda in the world. (I’m also not sure how Coates and Harvey collaborated on this book.)

Otherwise, I continue to enjoy Misty and Ororo’s friendship. Or I want to enjoy it, but both come off as aloof, despite knowing each other for years. Ororo isn’t an easy character to get into her head, and Misty’s identity as a hero and cop doesn’t make complete sense.

I was enjoying these women having a story, but of course, T’Challa is there. T’Challa also has a secret operation out of Harlem. Sure. Okay. Seems like the guy is having more problems running his country and might be a little preoccupied, but I guess if this is what it takes to get a book made about two black female superheroes working together. Sure, Marvel.

This story is full of layers. Anything about Harlem’s Crusade will have layers. Heroes for Hire always walked the thin vigilante or hero line. I imagine that Coates will have a lot to say about this line in future issues of this book.

Guice’s and Chater’s art is also incredibly layered. The book’s style actually reminds me a lot of the Luke Cage Netflix TV show in how it’s centered specifically in Harlem and how Harlem is it’s own character. It’s very place-centric. The angles and views are meant to show the building and the details.

Dan Brown’s muted colors work well to show history versus the current storyline, but also to center in Harlem as a part of NYC that’s under rapid transition, but without the glitz of Time Square or other part of NYC.

The art is snapshots of a place.

I’m never sure how I feel about defaulting to Hydra as our baddies. In the year of our lord 2017, I guess I should be thankful that somewhere in a Marvel comic book, people are still punching Nazis. And, of course, it would be Black Panther.

Even though I love Luke Cage, I do kind of miss when it was the Ororo and Misty show.