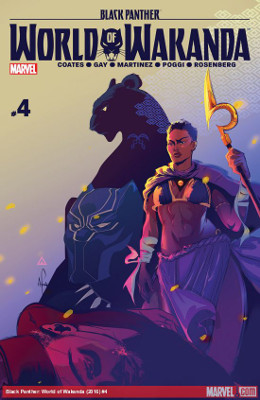 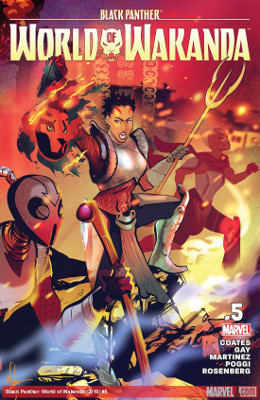 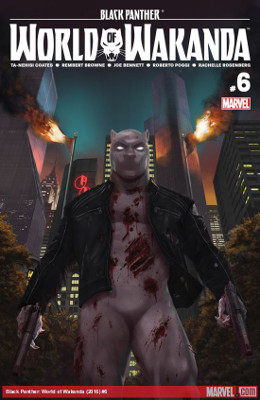 I realized in the last issue that one of the aspects I most appreciate about the vacation issue — besides the slow down bits — was having Ayo and Aneka in street clothing. They have such lovely styles. Martinez definitely knows her fashion, which so many superhero comics struggle with.

When the story began, we thought Ayo was the impulsive one. She’s certainly the one with a fiery temper. However, here Aneka gets impulsive. Here she runs off to take on Folami’s father, Chieftain Diya, in a desperate attempt to make up for her guilt at not being there when Queen Shuri died.

I don’t know anything about Wakandan laws, but it seems to me that Aneka didn’t have much of a choice except to kill him. And that there would be enough testimonial of Diya’s imprisonment and rape of the women who were supposed to be under his protection to get clearance for Aneka.

I’d expected Folami to be a bit smarter than she is. I understand how she would have some blind loyalty to her father, but this is not exactly a mystery for the ages. It is pretty straightforward. Diya wasn’t hiding anything.

Oh, Folami, blinded by her love of her father. As someone with a shitty father (and my father is not the same level as hers), I know personally how hard it to deal with finding out that your parent is a terrible person and then deciding how you want to act on that. While the human brain does incredible things to ignore what’s going on in front of our noses when we don’t want it to be there, Folami needs to stand up.

Instead, she digs her heels in more and tries to kill Aneka in her prison cell. It’s hard to believe that someone could break into a high-security prison, but you know, they are Dora Milaje.

I’m glad that Ayo rescues Aneka with Zola’s guilt of “I’m not mentioning the Midnight Angels armor for any particular reason or reminding you that you have the code for the door.”

The one thing I don’t get is why Ramonda condemned Aneka to death in the first place. There seems to be a missing piece I don’t understand about Wakandan law and tradition.

Also, this may be the last issue by Gay and Martinez! The last issue about Aneka and Ayo! Unresolved! No!!!! I will miss them so much.

Obviously, I’m deeply disappointed that this is not a comic book by Roxane Gay. For sure, this biases me against this issue before I’ve even read it.

That said, this is not a great comic book. And I’m even familiar with the White Tiger (Kasper Cole). He didn’t feel like a cop or like a hero, so I had a hard time finding the conflict of being caught between two worlds.

I did, however, appreciate the parts about how superheroing doesn’t make any money. Though you’d think perhaps T’Challa could put down a little cash for the things he wants done given he is a rich king and all.

Browne falls into a lot of trappings that new-to-comics authors often do. There is way too much text on the page. It reads more like a prose-only narrative. Browne doesn’t really know how to work with the visual medium. (Which a lot of that is just time and practice.)

Plus, and I hate to say this, I just found the story kind of boring.