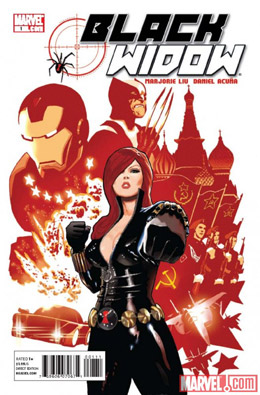 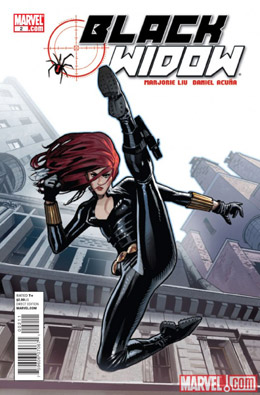 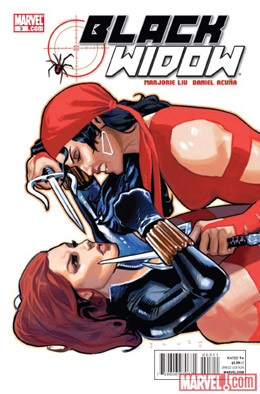 This issue made me uncomfortable. Uncomfortable in a good way or a bad way? I still don’t know.

I love Natasha having her own series. I know the decision had more to do with her being in Iron Man 2 than probably anything else, but I still love this. I still love being able to buy at least one on-going Marvel title featuring a woman.

The feel and tone to the comic is really great. There’s a spy element; there’s a secret code. It feels very Avengers, the British spy TV show. Natasha out there on her own. The meet-up with the Black Rose was pitch perfect. I loved them fighting. I loved the fake out that he was a villain. And it being an old woman who cuts Natasha open and leaves her for dead.

However, the operating room scene made me uncomfortable. I just wanted to take Natasha away — but keep the doctors and nurses to fix her. I understand James rushing into the room, but Logan and Tony too? Seriously, the woman’s guts are on display for all of them to see. And they shouldn’t. They shouldn’t see that. Plus, doesn’t that violate several levels of cleanliness in an operating room?

Of course, Natasha being without anesthesia made me uncomfortable as well. But oddly enough, not at the same level as James, Tony, and Logan’s intrusion.

The flashback of Natasha and James on their date was well done. Great moments of the superheros just being themselves together. And yes, so Natasha — and James too — to have gone after the wife-beater.

Black Widow #2 has Natasha striking it out on her. Someone’s still trying to kill her. She leaves the hospital barely able to walk to go to her safe-house. And she does it without the help of anyone but herself.

Wolverine’s sent to the hospital to guard her. It’s clear that he knows more about the hit against her (not just because we saw him in last issue), but he’s not saying anything. Also, I feel like with all his superpowers and own paranoia, Wolverine should’ve noticed something was wrong and that the people trying to kill Natasha were there before he did.

We then have Tony, James, and Clint in a meeting with a bald guy. (I have no idea who this is supposed to be, except someone who worked with Osborn, but isn’t evil enough to be in jail.) Acuna’s Tony seems really off and I had a hard time connecting the personality to the drawing. Here Tony seems to have a mini fro and crazy sideburns and facial hair. I know Acuna likes the ’60s aesthetic, but this is a little too much.

One thing I really didn’t like was Pepper being victim fodder to get at Black Widow through Tony. Though I do assume that like Bullseye, Lady Bullseye also attacks people through those they care about. Though the whole Lady Bullseye and Elektra thing makes me wonder if Black Widow isn’t going to be involved in the Shadowland crossover, which I’m not reading due to being years behind on Daredevil.

I like the Elektra-Black Widow fight more than I thought I would. Kudos to both Liu and Acuna for making it a match of equals and not just a match to sell comic books. I buy the ’60s spy styling here, and I love the Carmen Sandiego hat Natasha wears. That and the shades just make her look so sleek and cool. And the coat nicely conceals her recent round of surgery bandages and wound.

I assume the blonde woman in the club is Yelena Belova, the other Black Widow. (Unless she’s still in stasis.)

The action at the end was again, very ’60s spy. Natasha gets a bit of information and a better idea of who’s after her. But she doesn’t get all her answers, before the scientist is killed and the place torched.