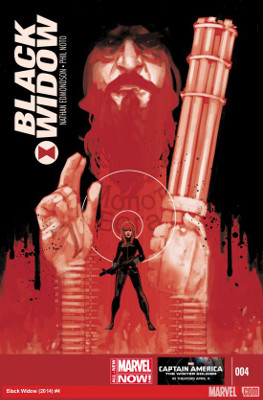 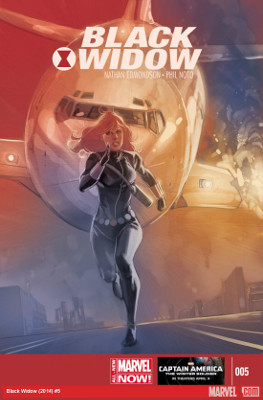 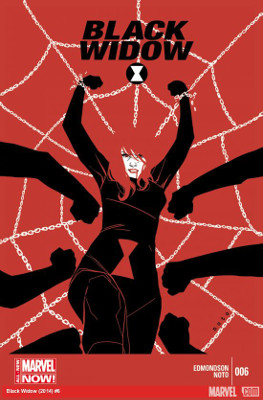 Am I supposed to start guessing at who’s controlling Molot? Who he’s treating as a god? I expected some plot with revenge on Natasha for her past, but it’s clear that she’s just some interfering S.H.I.E.L.D. Agent.

My biggest issue with this comic is the bunch of exposition from Natasha about how S.H.I.E.L.D. doesn’t pay well. I’m sorry, but a high-level operative in a branch of the government gets paid very well. Maybe a grunt S.H.I.E.L.D. Agent wouldn’t get paid so great — like low-level soldier in the Army — but you can’t tell me, Edmondson, that Natasha doesn’t get paid well. It’s such a false premises for the book.

And don’t even get me onto the issue of Natasha only getting upgraded to first class because she flies all the time. Seriously. Okay, maybe S.H.I.E.L.D. doesn’t pay for her super spy lifestyle, but they provide her with a lot of things besides her base salary, you can bet she’s getting: hazard pay (which is ridiculously high); paid business travel; paid meals, hotel, and transport while on said business travel; cell phone and internet bills; and not to mention all her high-tech gear.

This is so distracting from the comic book that it’s hard to care about the rest. Though I hope to see more of Maria Hill.

I really, really want to like this book, but it’s just not grabbing me the way that it should. Maybe it’s the premise that Natasha’s making mistakes and making too many of them. (In this issue particularly, who didn’t know that it was already a trap?) Maybe it’s because she has these supporting characters, but they’re flat notes and her world isn’t as rich because of it? Maybe it’s the incoherencey of the plot? Maybe it’s because I’ve read other, better Black Widow books?

I’m surprise Molot died so quickly, and that Natasha found his boss, Damon Dran, very easily. Even if she didn’t know finding Damon was a setup for a trap. Edmondson gave us a lot of background on Molot, delivered through exposition, which seemed like a waste of writing space. I don’t see it paying off, and it certainly didn’t move the needle on how anyone felt about his death, even Natasha.

Noto’s art is lovely, but it isn’t helping the story break through to any higher levels of graphical storytelling.

I deeply want to care about something in this book.

And today, Natasha learned that she needs people in her life. That was life lesson taught in these past six issues. Umm….okay.

Maria Hill seems more military commander here than anything else. Maybe a little M when she’s sending off Natasha into missions that aren’t officially (or on paper) sanctioned by S.H.I.E.L.D.

So Hawkeye’s going to join the cast? Because Isaiah is just a lawyer and lacks superpowers? Is this some setup romance for the movie ‘verse?

Noto’s full page of Natasha and Maria up on a rooftop in NYC was gorgeous. The rain was perfect.

Molto came back, but only to be killed again. And Damon was also taken down by the same fellow or organization. Seems a little weak for the main plot.