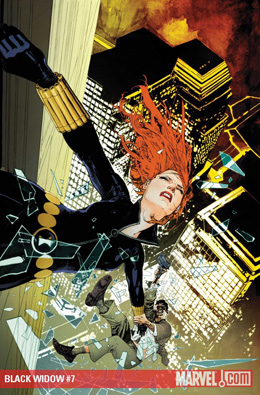 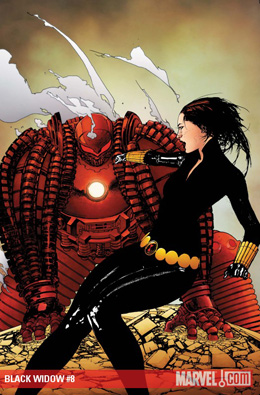 I’m still not quite feeling this comic. Garcia’s art seems to have improved from the last issue. He’s doing much better with Natasha’s face. Though there are still one too many times her uniform’s unzipped in a way that’s only suitable for stripper Black Widow.

While I didn’t mind Swierczynski’s plot in the general action movie sense, I’m not feeling it as a Black Widow plot. Again, I’m tired of two back-to-back stories where Natasha has gotten the blame for something someone else did pretending to be her. Especially in this issue when the military guy comes to actually take her away.

I do think her method of getting the information from Nick was very well done. I suppose I’ll see how it ends up next issue.

This creative team just didn’t do it for me, which means I can’t say that I’m overly distraught that this title got canceled. (Though this does mean, Marvel, that DC is kicking your butt on being able to support/sell women-fronted titles.)

I don’t know what exactly about this story just never clicked with me or made me care. Perhaps it centering around Nick, a rich senator’s son. Or perhaps because the arc before this one was about Natasha’s history and her getting blamed for crimes which she did not commit.

I do have to say that I did not see it coming that Nick’s father killed himself.

Natasha’s team-up with Fatale was only passingly interesting. I just found the whole thing bizarre as the point-of-view shifted to Nick with both Natasha and Kate as his super-powered female protectors. I don’t know, but something just rubbed me the wrong way. I’ll be reading Widowmaker, but more due to my love of McCann’s writing than interest in a wrap up of this Swierczynski storyline.