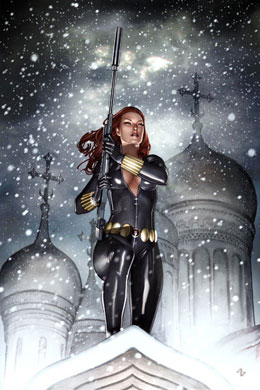 So I have yet to forgive Cornell for those Doctor Who episodes where Martha was stuck in the racist past and pining after the Doctor and the load of bullshit that was. But wow, does he mess up Black Widows origin story, including making it all about the romantic men in Natasha’s life and about Ivan. Okay, yes, Natasha calls out Ivan at the end that he’s made her life about all the men and about his unrequited love of her. But Cornell also writes that story. It’s not Ivan who remembers those intimate moments Natasha has with her exes, but Natasha herself. Especially the moments where the romance ends.

The Black Widow is a spy, and I expect a spy story. I expect stories like Richard K. Morgan’s books about her that layer her past, or hell, even the romance parts of her story with Bucky from Ed Brubaker are even less about romance.

Instead, Black Widow: Deadly Origin is about every man that Natasha’s been intimate with. Every man that she’s “loved” or at least had a close connection to. It was about Natasha being the crazy woman who’s personality is breaking apart because of all the lives she’s lived and about Ivan, who was the one who orchestrated putting her back together and saving her. It was about her feeling like she was going crazy and Ivan proving he’s what she needed.

Not to mention, Raney’s pencils were not my favorite. The best part of the book was Leon’s pencils, and I loved the styling that he gave the past with special attention to the styles that were used in different eras of Marvel books. I just wished they would’ve given him some more time so he could’ve filled in some more details. Especially in the last couple issues, Leon’s pencils seemed rushed.

Usually, I don’t talk about the extras in a trade, but I found the extras in this one particularly interesting. It had original concept art for the different issue covers, then the “revised” version, and the final printed version. In the two covers with the most offensive zip-down of Natasha’s top, the origin version of them doesn’t have it zip-down. In the one used for the trade cover, her costume’s zipped all the way up until the revisions; and in another one, her zippers down like it would be to let air into your costume, but in the final version, it’s all the way down to her navel with boobs hanging out. This presents a really good argument that covers aren’t “just how the artist does it.” And that Marvel editorial continues to think that “sexy” sells. Vomit.

I really want a good Black Widow story. This is just not it.