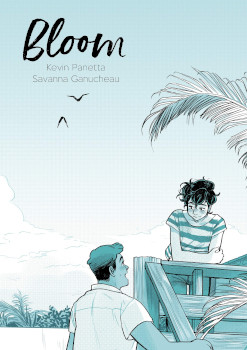 I love a story with soft, gentle boys who fall in love over baking. These are the types of young adult romance that I want to read more of. Baking! Queer love! Baking!

Bloom follows the familiar patterns of a romantic comedy. It even starts with a wedding where Ari’s sister gets married and tells him he needs to stay behind in their hometown to help in their parents’ bakery. As trope-y as Bloom gets, it’s heart and queerness win out.

Ari is a character with a lot of personality flaws. He’s whiny and demotivated. Ari’s in a band with his friends, and they’re all planning on moving to Baltimore together. However, it’s clear from the start that this isn’t going to happen, and since we never see the band actually practice or perform, the band’s days are numbered.

I appreciated how gentle Panetta was with Ari. Another writer might’ve not given him the sympathy and the space. Ari’s clearly struggling. It’s about his changing relationships with his friends and his family, how he cannot quite figure out what he wants to do next in his life, and the something that’s missing, but he cannot figure it out.

One of the most understated relationships in Bloom is Ari’s attraction to his friend Cameron. For the book’s purpose, no characters ever step to the forefront and identify their sexuality explicitly. All the characters are accepted for who they are without comment. Who anyone dates only gets commented on from a “are they a good match?” or “do we like that person?” perspective.

And Cameron is a jerk, and from what we see, Cameron is also straight. He becomes involved with their fellow bandmate Lauren. The two get serious about moving and having a band — without Ari and their other friends Jake and Hanna. Cameron is who Ari might be if he wasn’t sensitive, and if he didn’t, somewhere underneath it all, care about his family and friends.

Cameron is notably a “horrible” to every person. But he’s particularly horrible to Hector, and that’s how you know he’s an unredeemable character and somewhat not worthy of Ari’s affection. At one point, Ari does try to live the dream of band life in Baltimore. But, of course, Ari’s no longer in that band, and he’s living on Cameron and Lauren’s couch. He is miserable because this life wasn’t for him. But sometimes you have to taste it.

Of course, in the end, Ari finds his true love in Hector, someone who is sweet; keeps his friendships with Jake and Hana, who are actually good people; and he builds and repairs his relationships with his parents. He gains more than if he moved to Baltimore, even with all his friends and intact band.

Hector was my favorite character in the book. He’s kind and has a true passion for baking. Yes, sometimes Hector is too generous — but he’s someone with strong boundaries. He may still be friends with his ex-boyfriend Andrew. However, there’s a scene where the two watch the Gilmore Girls together, and when Andrew tries to reignite their physical romance, Hector stops it from happening. He even pointedly explains the emotionality of the situation when his friend Meg tries to make the perfect group dynamic between Hector, Andrew, Meg, and Ari later in the book.

Ari and Hector spend a lot of their falling in love time in the bakery together. Ari’s parents are mostly offscreen doing all the other things that running a business requires. (There does seem to be something happening with Ari’s father, but this volume does not go into it.) Ganucheau’s art here is beautiful, and the choices of the blue-green wash and color palette really bring in the understated emotions of the story.

As a baker, I loved how Hector baked and how physical he was with the work. Ari is slight compared to Hector, and it shows just how easily Hector can lift those flour bags or change a tire on their delivery truck. The book made me want to bake, and what more can you really ask for.

When Ari and Hector go to the fair together, you see how they can work as a team. It’s pointed for later when Ari’s father recounts how he and Ari’s mother fell in love and work as a team. When he says this, you see both Ari and Hector lighting up about having a life partner like that and how much they already had started to see that in each other.

The climactic scene where Ari and Hector finally kiss was wonderful — but also, I had my kitchen safety hat on and was like, “oh, no, the burners!” I was surprised that Panetta and Ganucheau opted to go with such complete destruction of the family’s bakery and attached home.

It did feel like Ari retreating into his shitty behavior that he would let Hector take all the blame for the fire. Yes, Hector owned up — and he wasn’t going to out Ari — but that scene where Hector is fired was perhaps more emotionally hard than the fire itself. It was so important that Ari told his parents the truth, or at least how it was equally his fault before he went to apologize to Hector.

While the two get together, you can see more of Hector’s boundaries in how he does go back home to continue his schooling. He will have the bakery and Ari, but it isn’t entirely his world yet. It felt real for that age too. Same with Ari heading to community college and refreshing his friendships with Jake and Hanna.

I’m really hoping for a Bloom volume 2 because this is just wonderful. I want more gentle queers who bake, and I want more stories about Hector, Ari, and the rest of the community.