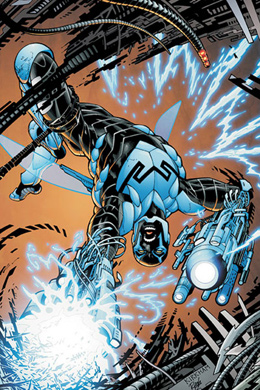 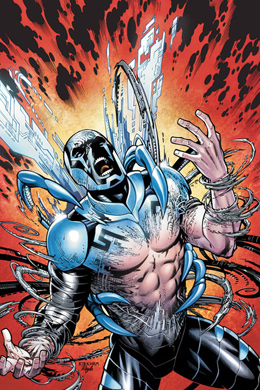 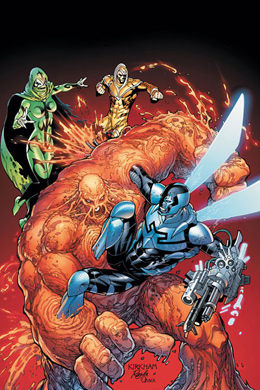 First, I’m really glad that Jaime is the Blue Beetle they ended up going with. I don’t know much about the Blue Beetle’s world, but I thought the first part of this book did a really great job at setting up both what the Khaji-Da beetle is, how it came to Earth, and who Jaime is. I really loved the scenes in Jaime’s world: that he’s scared of playing football with the jocks, knows a variety of different people in his school, has a crush on Brenda, and has a family who really cares about him.

That said, it was the second half of this book that I felt struggled. It went from a really small world to Brenda’s aunt and her large criminal network. I don’t know who these villains are that are stealing the scarab and the ones who’ve come to steal it from them. Or really where they are. Why do Jaime and Paco even run into them?

We’ll see how next month’s issue is.

I liked how trusting Jaime is everyone and how he tried to tell them who he was. But Khaji-Da stopped him. I’m interested to see how Jaime further deals with the beetle and what he means that it’s hurting him.

It’s also curious that the other Blue Beetles seem to think this is the first appearance of one on Earth. Does this mean in the reboot that Ted Kord doesn’t exist? (I have no feelings either way, so whatever. But it will be a noted choice that the creative directors who love the Silver Age erased someone from that era.) Also an interesting comment that they seemed bored of their task to conquer the universe.

While this comic hasn’t been super thrilling, I am interested to see where it goes and will keep reading.

The pacing seems really off in this book. But I can’t tell if it should be going faster or slow down. Or perhaps there’s not enough depth for the pace it’s currently at. I leave this comic wanting more, but I can’t figure out what that more is, and if it’s truly that I want to read more of this title.

I’m glad that Jaime has some control over the scarab, even if it seems to be only because it’s broken. I do like that his family is a big part of his life. I hope that Bedard doesn’t kill them off; sometime it’s just nice to have a superhero with roots and people he cares about.

ETA: I’ve decided to take this comic off my pull list. I’m not really into it.