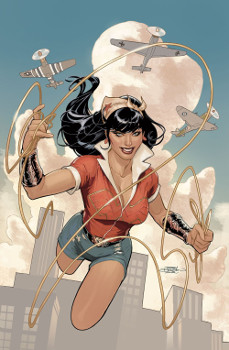 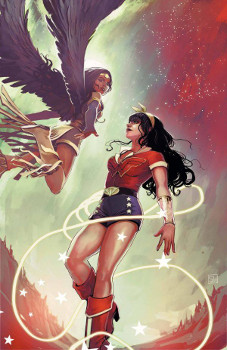 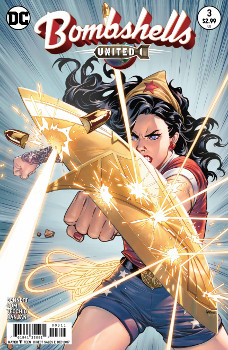 Turns out the reason why Wonder Woman was missing from the final battle in Russia of the last series is that because she was in the US and helping to rescue Japanese American citizens being sent to internment camps.

I’d considered that perhaps Bennett would move the series away from WWII with the conclusion, but there is the entire Pacific Theater that was mostly untouched in the other series.

I’m glad to see Bennett not ignoring Executive Order 9066. Because, of course, Wonder Woman would not stand for it.

I’m also super excited to see Donna Troy, Cassie, Yuki, Yuri, and Dawnstar. This could be a lot of fun to see Wonder Woman mentor these younger ladies. I loved seeing Donna in such awe of Diana, and this legend about putting up a wind chime and lighting a black candle to ask for her help. Wonder Woman should be a legend.

Am I remembering right that Waller is controlling Clayface? I like this idea that he hitched a ride via a little bit of clay on Wonder Woman’s shield. I also hope something about her being made of clay comes up in some banter.

Sauvage’s art is as gorgeous as ever. I was curious to see how’d she do with natural landscapes (as opposed to cityscapes), and it’s lovely. Her Wonder Woman is marvelous, and I’d wish she’d done the cover instead of the Dodsons.

Dawnstar’s exposition about her life, her powers, and the history of the modern United States being built on the backs of oppressed peoples was beautiful. But it was still exposition. Accompanied by Sauvage’s lovely art.

It’s always handy to have a lasso of truth around when you aren’t sure people are themselves. Even if it was a nice trick by Clayface.

I do want more of Donna Troy. So much more of this version of Donna.

Clayface is just a hard villain to care about. But also, you cannot really defeat him. He’s clay. (Though how has Bennett not taken the obvious clay connection that I’ve seen in other Clayface versus Diana stories.)

I really appreciate how Bombshells: United breaks up the sections to show us, in print, which artist is responsible for which section. The previous iteration of series has actually showcased a lot of great artists, so it’s nice to know which ones did each section, in an easier manner.

Oum’s art was very western Pacific Northwest. Unsurprisingly, she lives in Seattle (and Honolulu). Oum just knows how to capture this environment in a very specific way.

Bennett speechifys quite a bit in this issue. Particularly, she does so on the topic of mercy and how Wonder Woman protects all who are oppressed, even if the oppressors have painted themselves as the “good guys.” Speechifying, as a writing method, is definitely par for the course with this book, and something you have to buy into when reading this title.

I do greatly enjoy Bennett exploring Wonder Woman’s beliefs around mercy and redemption. Diana and the Amazons do believe in true reformation of villains. Baroness Paula Van Gunther is also reformed in the original Wonder Woman comics, and she comes to eventually fight by Wonder Woman’s side. This type of redemption and mercy is little explored both in our culture and in our culture’s creative works. Wonder Woman does often stand alone in this.

Though Wonder Woman also does punch a Nazi or 100 of them when she needs to. And Bennett does a good job at showing this balance.

I’m unsure if Wonder Woman is actually dead. I did love the (finally) callback to her being made out of clay. I also loved Donna and the other girls picking up Wonder Woman’s tools and combining their powers.

Vecchio’s art there reminded me a lot of the designs of the very popular DC girls series. The stars also reminded me a lot of America Chavez. But, it all fits Wonder Woman. And you kind of have to defeat Clayface — the zealot for his government, right or wrong — with magic.

I was surprised that the raven herald was Paula. She has a lot of redemption to work on and atrocious crimes she can never make up for. And I liked the compassion Bennett shows for Paula in how, of course, Paula would be shy about showing her face.