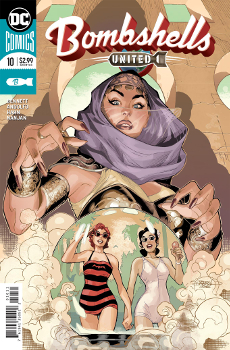 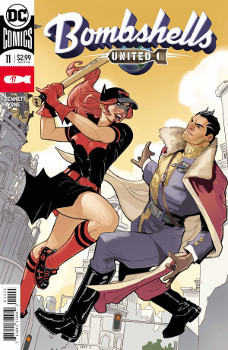 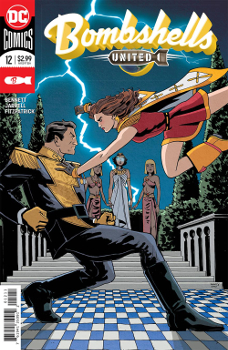 It seems like so many of our heroines are easily foiled, defeated, and captured in this issue. First, Mary Marvel is easily trapped and captured by Black Adam and put in chains. Then Kate’s connection to Black Adam makes her and Renee’s plans to defeat the Minotaur and go after Black Adam fail. Next, we see Talia al Ghul for two seconds say that she’s going to defend the Lazarus Pit and then she puts down her sword. And he’s like “oh, yeah, I knew your momma.”

Since Kate calls Jason her “little Robin” then I assume that’s the confirmation that he’s Jason Todd.

I don’t know what to make of the nostalgic storytelling of Rene’s and Kate’s life with Jason before he died. Yes, this is all nice, but they were also in a middle of the war and I can see how both of them are just in awe of Jason.

It was funny to see Cheetah be chased away like a cat begging at the table.

At this point, I’m going to assume Isis will be brought back to life.

I can’t quite figure out how this book has lost its footing. Perhaps Bennett doesn’t have a long-term vision for this next segment. I’m kind of surprised we’ve been in Spain all this time. This also felt shortened due to the preview in the back. (One that I don’t care about. There are very few DC books I’d even pair with this one.)

Black Adam’s powers seem much more subdued when he starts fighting against Kate, Rene, and Talia. Jason and Mary don’t seem like people he’d spare. In fact, it makes little sense that he doesn’t kill anyone here.

I’m not surprised Isis isn’t on Black Adam’s side. Though I don’t know about this whole Lazarus pit mind erasing.

Also, I kind of expected the entire place to start falling down, apart, or drying up when Isis was revived. Even if Black Adam didn’t start zapping the place, I expected an independent fall down with the last of the pits having been used up.

At the end of each Bombshells chapter, the right thing happens. The right things happen here: Isis, Jason, and the Minotaur go back to death, the pits collapse, and Black Adam realizes his mistakes and lets time catch up with him.

But what drew me to this issue was Kate and Renee. Not just because I love them both. But because how — even if they are not officially together any longer — Bennett does not deny the impact of them on each other and that they still love each other. Too often in Western ideals of monogamy, we act as if the relationships which came before the one we’re currently in never exists. As if those moments didn’t matter anymore. As if we built together is no more.

Bennett not only uses this issue to wrap up Spain neatly and let the good gals win, but to say goodbye to Kate and Renee as a couple. And let their impact resonate.