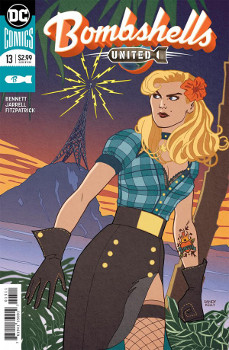 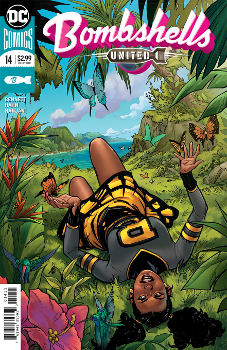 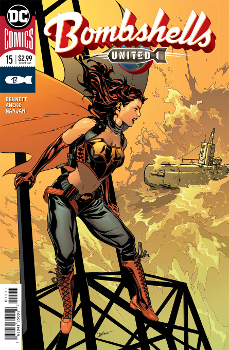 While I’m excited for Bumblebee and Black Canary to hang out and maybe team up, I did not get a lot of this story.

At first, I assumed the party massacre was around some Joker (or Joker henchperson) type spell. Especially with the big smiles and all the murder. But it was music-based, which is the connection to Black Canary. Also, I kept wondering if they were actually okay after the music stopped, or who had ended up dead.

Then there’s Bumblebee; even if it’s kind of obvious based on her name, I did like her with the plants. Though I’m not sure if the creepy ghost hand was due to the music or what… But Black Canary interrupted just in time.

And more than just in time, they were on the perfect beach in order to rescue the Bat Girls from lava. That lava seemed rather fast for, you know, Hawaiian lava. I’m not saying it’s not destructive, it’s usually just a slow destruction — but I guess they were dropped right into it.

I kind of wish this was an Ollie-less world. Perhaps just too many times I’ve read a story where Diana is on the run after everyone thinks she’s murdered Ollie. How many retellings of this do we need?

This storyline continues to be a dud, and Hahn’s art was not my favorite. There were far too many characters to keep track of in this book. I know there’s an assumption that if we’re still reading this, we’ve probably read all the past issues — I have — but there are too many moving pieces.

Fight scenes are not Bennett’s strong suit, and this entire issue was something of a bar room brawl. First with the Suicide Squad trying to arrest Black Canary and then with the Enchantress and Ravenger being under the musical spell.

I suppose what’s probably happening here is that Bennett is building up to the new Big Bad in the Pacific Theater. But everything here felt out-of-time, in that this book could’ve been set in almost any era (minus some modern technology).

Hahn’s art felt DC house-style when they tell you to tame it down a bit. I did like his Killer Croc and how he expressed Croc’s emotions. However, there were details, like Black Canary’s skirt not functioning like an actual skirt moves — or one for someone who regularly fights — that keep throwing me out of the story.

I’m still not digging this plot. We are not surprised that Black Canary is good. Nor that Ollie is alive. Or that Ollie is under the spell of the siren behind the song, who we haven’t met yet.

Vampire Batgirl is one of the better characters. Given how much vampire fiction I’ve read, I found the comment about how a vampire can still draw air into their lungs and give mouth-to-mouth resuscitation was cute. I also loved this scene of her reviving Dinah and the artwork being a callback to the original Birds of Prey comic book. And if Ollie is evil, maybe here — in this sapphic reimagined world — we can have a canonical Babs and Dinah relationship.

Frankie pointing out how young Felicity is was harrowing. I remember my grandpa telling me that he tried to sign up for service to fight in WWII and lied about his age. Which he lived in too small of a town for the recruiter to be fooled by my 14-year-old grandpa. But I’m sure in other places, very young teen boys signed up for service.