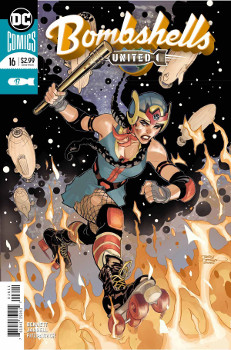 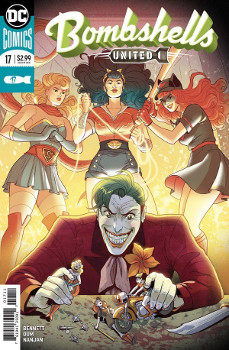 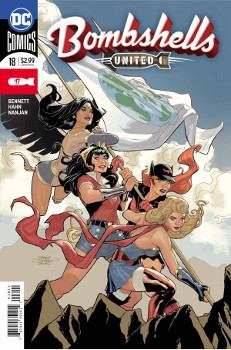 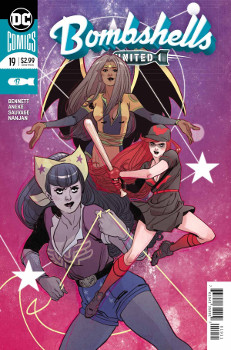 In general, the New Gods aren’t my thing. I do have a soft spot for Big Barda, but that’s it. All that said, this was a surprisingly different ending than the one I’d be anticipating and it was almost a welcome surprise. Even if I’m not surprised to see Bennett avoiding the Pacific Theater and the complex politics of it. But there may be some benefit of the doubt around this considering Bombshells: United is ending at issue #19.

Big Barda on her roller skates and beating up Goddess Granny felt like the levity and a bit of wackiness this book needed.

I also really liked the little views into each of the characters’ minds and their insecurities. It was a nice moment to show just what the mind control was doing and what was happening.

It was sweetness to see Bumblebee start the spell breaking song. Especially since she’d seemed a little useless since the Suicide Squad arrived. Though she notably was the one exposed to the brainwashing music multiple times and never fell for it.

Apokalips, we’ll see how this rounds out.

Yeah, I’m still not feeling this ending. Of course, they brought back the Joker. I kind of do like Bennett’s idea around the Joker being a symbol and something that reappears for each decade or era. (This is very similar to what Warren Ellis does over in the Wildstorm Universe, which is now a DC property.) Mostly, in that I always feel like the Joker should die again and again, but sadly DC tends to kill Batman off more than the Joker.

I still don’t get the Joker’s Daughter in Bombshells. This book has defeated her multiple times, but yet, she’s still roaming free and causing problems.

Not sure how I feel about Lena Luther, especially how popular she is (and how essentially mostly good she is) in the Supergirl TV show. Especially since Lex is not really a bad guy in Bombshells: United. Though having Wonder Woman in Australia is a good excuse to have her ride a kangaroo. I cannot believe they’d actually kill Steve Trevor, though I guess who knows.

Lois Lane and Supergirl hooking up is great. Even if I don’t feel invested in the USSR part of the story.

I’d love to know more about Flash, but somehow I don’t think there will be time. Especially when this issue was shorted a couple pages.

Ugh. This issue felt like it was written and produced in like half the time a normal issue would take to craft. It felt light and didn’t connect with me as a reader.

I am glad that we figured out how to stop nuclear bombs from being dropped on Japan. And I was okay with Amanda Waller being the one who was going to bomb Japan as it fits her characterization. Even if we haven’t gotten to know her very well in this world. No doubt the world would be a better place if no nuclear bombs had ever been dropped, but of course, they were never going to drop them if they didn’t know they already worked, so there were at least bombs exploded in testing.

I also don’t understand her obsession with Zatana.

In a similar manner, I don’t care much about what happens to Lex and Lena Luther here. The story has never been about them, and we’ve never gotten to know them. Even this “good” version of Lex who’s helped the Bombshells since the first issues of the first run of this series.

Hahn’s art also didn’t bring anymore passion to this book. It felt flat and lifeless. The characters were simplified, and while the skirts were always short, the art didn’t have the normal fun and flare.

Well, that was an ending to the World War II. Zatana magicked all of the Joker’s Daughter and all the other bad energy from Apokolips away and problems solved! A few people died in the meantime, but Zatana herself got back to her little family with John and Raven. No biggie!

Part of me can sympathize with Bennett getting the book canceled and her having to come up with an ending, and a way to sum up WWII. Just a little task around a little world event. However, poof, it’s gone! felt a tad underwhelming. Even if Wonder Woman was 100% the correct character to have the narration task to take us from war to peace.

While I liked the second half a bit better — I have mixed feelings on the interactions between Selina and Bruce Wayne. Even if Selina is clear that Bruce is to guide, but not lead, any Cold War operations and a revival of the Bombshells, he is still a man. It still seems to cheapen the female-centric world. No matter how much I liked the message of Bruce growing up to be a better person in this universe because of the Bombshells and other female superhero’s messages.

Of the endings, I most loved Wonder Woman’s. She felt so right, and Aneke’s design was perfect. Other notes, like Harley and Ivy, Lois and Kara, and Bumblebee were either incredibly obviously right for the characters, or for the times. I’m mixed how I feel about Renee still being out there and fighting like Che Guevara, and how I feel about Kate and Maggie settling down in the suburbs of life. I suppose — even if we didn’t get to explicitly see it — there needed to be a wedding in this book.

I wish this second half had fared better. The plots weren’t as tight, and too often, the character design wasn’t as charming. The ending…well, it’s an ending.