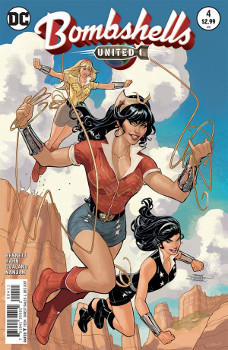 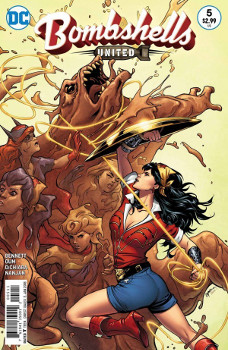 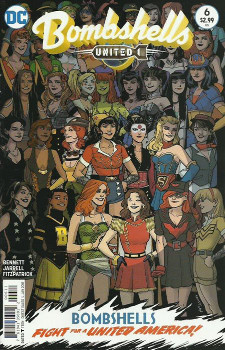 So is Clayface now Silverface? Yeah, you can never defeat Clayface in the traditional manner.

As much as I like what Emily says about Wonder Woman being a part of them, I will miss Wonder Woman in this book. I hope that the time we spend with the Wonder Girls will be well done. I do think it’s odd we see them come to LA, when we really hadn’t wrapped up just where the other Japanese Americans went.

And I’m not sure what Dawnstar’s motivations are.

I do think it was quite funny that smoking was used to show the difference between who Basil (Clayface) could’ve been and who he was. He was evil, and you know because he smoked. Which made me think about how a lot more characters in this book would be smoking if it was historically accurate.

I’m not sure what to think of this truth magic. Yes, it’s going to get people to realize that they shouldn’t have let Japanese internment happen, and perhaps have them welcome their neighbors back. However, it’s still magic, and is magic the only way we can cure people of their hate and bigotry? Because if so, we’re pretty screwed in this world.

To no one’s surprise, Wonder Woman is alive again. She comes to life from a statue and magic.

The art also wasn’t my favorite. Which didn’t help how lukewarm this message read to me.

We shall see what Donna says about protecting Dawnstar and her people, Native Americans. Seems like a little too late. Of course, we just did end Japanese American internment with magic. I mean, in other situations we punched more baddies.

This felt so incredibly lightweight. Too lightweight, even if we’re getting staging and characters for the next round of storytelling. Jarrell’s sparse layouts just amplified that feel, as much as I did enjoy a lot of her art. Her Bumblebee, Katana, and Jessica Cruz are particularly fun and beautiful.

But overall, this just didn’t do it.

I’m not sure how Katana’s ghost sister (which is a nice change from her ghost husband) will affect the plot. Or where Katana will fit in. I assume she’d be on the side of imperial Japan, since she is Japanese and from Japan.

I also don’t understand why a Star Sapphire would attack Hal Jordan. And be played as evil. (I realized I should say that since there are plenty of reasons to punch Hal Jordan.)

It is nice to get confirmation that Wonder Woman is indeed back to kicking butt and taking names.