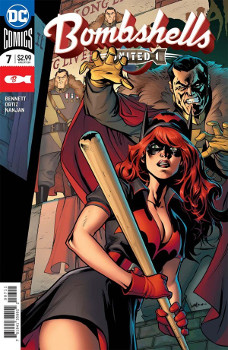 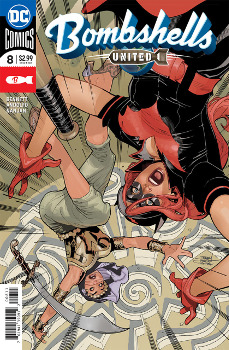 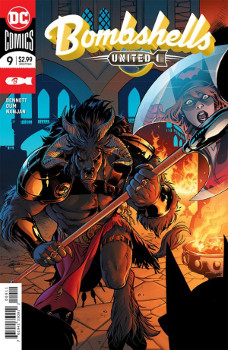 I’m okay with our Bombshells being a little sexier, but the whole point is to be queer lady sexy and this felt off. Other queer ladies and enby lady-loving folx, I welcome your opinions on this.

I did enjoy the story. I’m still not a fan of the Religion of Crime. Mostly because it never makes any goddamn sense to me, or at much sense as any religion will make to this skeptic.

Black Adam seems like a logical villain choice here. I don’t know much about Spain’s WWII history, but this made me curious and want to correct that knowledge gap. Additionally, Black Adam’s magic seems like the right mix if we’re involving the Religion of Crime.

Andolfo really needs to illustrate more lesbian love stories. Seriously, it was her art that sold me on the story of Kate and Maggie’s romance. All the looks, all the flirting. Yes, I want more of this. While I appreciate how queer this book is — and how it centers women, queer women, women of color as heroes who save the world — sometimes I just want a little more smoop.

Loved the use of the baseball string. It was clever and fun.

Though I was waiting for Wonder Woman to show up and charm her friend the Minotaur. But hopefully that wasn’t Ferdinand.

Of course, Talia al Ghul shows up and these are the Lazarus pits. I’m just fine with Bennett choosing to connect the Religion of Crime with the League of Assassins. It makes for the former make more sense.

There’s something going on with Renee that I feel hasn’t been fleshed out here.

Not so sure I care to see another Cheetah story. Unless as I called it, she didn’t revive Jason, Rene and Kate’s dead son.

100% called that Cheetah put Jason into the Lazarus Pit and brought him back to life. This is how she’s attempting to redeem herself. But in typical Cheetah fashion, she’s looking for the quick fix, instead of the long-term work.

Jason will now be a kid forever. Is this supposed to be Jason Todd? I have so many questions about what will happen. Especially since Kate has been faithful to Maggie, but now her family from before is back together. It’s pretty common for couples to break up after a death of a child. But what about rebirth reunions?

Bennett’s telling of Black Adam’s origin story is not particularly compelling. Isis always dies. This is the same old story. She actually just doesn’t die; she’s fridged for his rage and anger, as punishment for his constant seeking of power.

Characters who you can sympathize with are more interesting. Bennett didn’t build that story here.