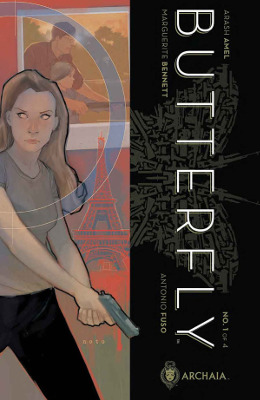 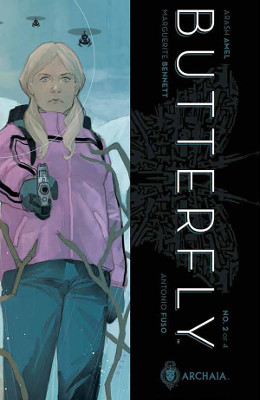 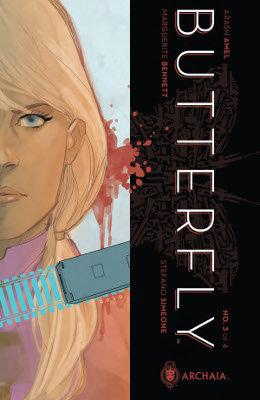 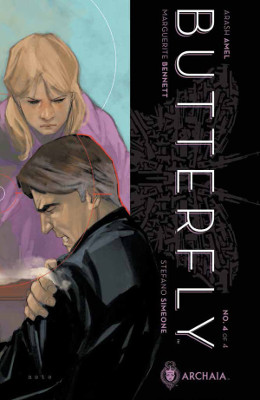 Interesting father-daughter story that’s wrapped up in the package of a spy book. Comics are a little notorious for dead parents, so it’s always interesting when they come back to life.

While it was neat to see Butterfly slip through a crowd unnoticed, I do think that kidnapping a child was a bit of a risky move. Yes, it makes you even more unseen as a woman. However, the worried mom is probably freaking out about her missing child.

I can’t help but wonder if it was her father, David, who actually killed Mikhail Ilchenko. Or it’s someone who wants to bring David out of hiding and knows he’s still alive. Clearly, Nightingale was somehow set up for Butterfly to find her father. Though it wasn’t set up by David, who set it up? Who is making them connect again? David seemed pretty surprised to see Butterfly.

So David didn’t know that Butterfly was on her way, and he’s not the one who pointed her in his direction. Instead, it was someone looking for Nightingale, aka David Faulkner, and it’s all connected to Miranda Oil. Which was how Mikhail made his money.

Seems like Angelique and Martin may end up as cannon fodder. At least, they are the only ones who don’t know how to shoot a gun and haven’t been trained as super spies. Though Martin’s somewhat serving as the comic relief, maybe? Not sure there’s one of those in this very serious book.

I liked Butterfly calling out her father on marrying a woman younger than her. And clearly, David, even in his younger days, never had a problem sleeping with other women, like Juno, his fellow operative.

I do hope this story just isn’t about evil Somali Muslim men as baddies.

Looks like our ultimate bad guys are some greedy white fellow and one lady: Barney and Juno. Of course, it’s probably not even them, but whomever’s pulling strings at Project Delta.

Glad that Angelique and Martin are somewhat safe. I did not see David getting shot so soon and Butterfly just leaving him to die in the snow. Though seems about right for this book that she would ultimately regret it when Project Delta has been compromised. Though it seems like David’s flashbacks point to it always being corrupt, whereas Butterfly’s story is saying that there’s corruption again, but there hasn’t been before.

Somehow I don’t think David’s dead, and that we’ll see him for the final issue. I hope Butterfly gets more agency in her life.

The ending was pretty unsatisfying. Butterfly still lacks a lot of agency. Especially when it’s revealed that her bosses think she just disappeared instead of calling in. Everything that’s happened to her is of her father’s doing, even if unintentional.

Though I can’t blame her for helping David, and for her going back for Angelique and Martin. Or even trying to protect David from their deaths.

This, overall, felt very unsatisfying of an ending. I can’t help but wonder if this was pitched as an ongoing, then shortened to see how it would do.

See what happens to a daughter’s life because her father’s a spy, buy Butterfly