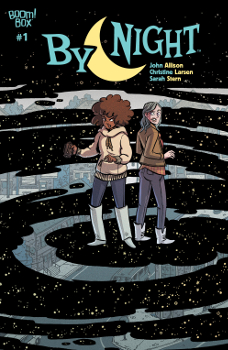 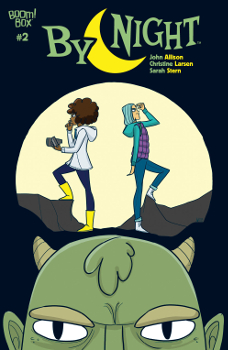 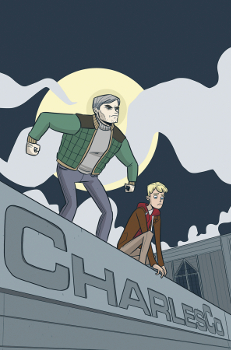 Heather is a person I know. She’s the friend who always pops up. Heather’s annoying and reckless. She’s so incredibly reckless, and she’s always up to some scheme. There’s more to this entire break-in than wacky fun. It is interesting how Allison uses the narrative to call Heather’s behavior out, and the smaller parts of Jane’s flaws.

I know there are small towns out there with research facilities that employee one or two scientists, but I’d like to know more about why Jane’s back in her hometown. Especially since science usually pays for itself, so it’s not like she’d have huge school bills.

Of course, they find a dimensional portal. Or something similar. I’ll be curious to see how the reveal happening in the first issue plays out in the next ones.

I assume since the Boom wrap-up in the back mentioned both Chip (Heather’s dad) and Barney (Jane’s coworker) that we’ll be moving back-and-forth between the two different realities. Maybe fighting off some invasions. Or realizing exactly what those exterminators are doing.

Given how grounded Allison’s Giant Days is in the real world, it will be interesting to see his writing unfold. Also, to see a British man writing about North Dakota. We already had a very realistic dive bar bathroom. Gross.

Larsen’s art is sharp and expressive, and definitely fits the style tones which works with the stories Allison likes to tell.

I still don’t know how much I’m into this book. Maybe a few more issues will allow the story to come into some kind of shape and the characters to make more sense. It’s not a ‘must read’ yet. I do hope that the ladies will come back from the other dimension and not be sucked in forever, or constantly reality hopping like Sliders.

Jane’s boss is the worst, and it makes me sad that Barney’s recommendation is the way she got her job. As that seems like a last resort for her. I’m curious to see if there will be room for conversations around gender and race. Maybe everyone will find out about the new dimension, and then she’ll become the top scientist exploring this universe.

Of course, the werewolf man doesn’t seen so happy that Jane and Heather found the dimension to start with.

Chip and Heather’s relationship seems to be one of the extremes, and it’s clear they are both struggling with work, addictions, and figuring out what they want from their lives. This could be a really interesting layer on the story. Though it does make me want to see more of Jane’s relationship with her mom, which we get very little and not enough to suss it out.

Larsen’s art remains fun. I am curious to see how their designs for this other universe differ from the regular one. Especially as the story gets more imaginative.

Chip turned out to be a little different than I thought he’d be given the last two issues. He seemed very determined and a very solid person. He even kind of believed Heather’s note and entertained and defended Barney. Maybe I was reading a lot into Chip from my own issues. Hahaha.

But this issue was missing some energy. I don’t know if it’s because Heather and Jane were missing, or because this is a very early issue. It’s hard to give the narrative to someone else (Chip and Barney) when it’s issue #3. We don’t know them or this world well, and frankly, everything else is far more interesting. Everything else we are not seeing here.

The punks were ridiculous. Like usually there’s charm in Allison’s book, but they were not.