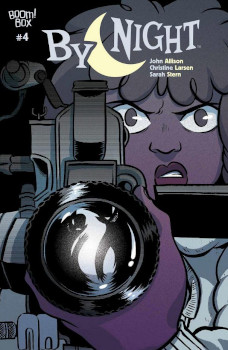 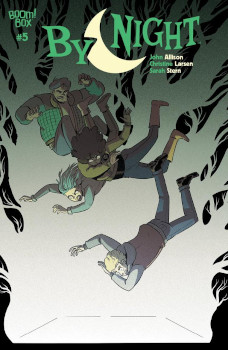 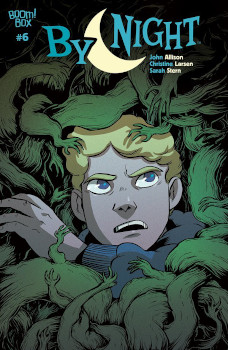 We now don’t have any issues getting to the location of the equipment to send us to an alternative dimension? It’s not that this book doesn’t connect any dots; it’s more that this book leaped over any rules and followthrough we maybe thought might be needed to get from A to C.

What we do get in issue #4 is more about Jane’s own impulsiveness and her pushing for her ideas. This is why she’s friends with Heather because Heather doesn’t see the danger and doesn’t put any brakes on her.

Unlike maybe Barney. And definitely unlike Chip, who is being a dad.

I am unsure when they all decided to go back together, and when they decided they wanted to make a movie about it. Or that making a movie about this dimension would be the most important thing to do. It’s a little frustrating given that Barney and Jane are supposed to be scientists. Not film students.

I get it. The bulk of the story Allison wants to tell is in the other dimension. This is where his quirky comes out. More vampires in caves and trolls who love 80s memorabilia. More hints at a great ruler of the land who isn’t going to be happy to find humans there (again).

Because of this direction, I’m still surprised that they haven’t gotten stuck in the other dimension. The back-and-forth is what is puzzling me notably as we are missing whole swaths of decision making.

I do appreciate that Larsen’s art isn’t scary. This story doesn’t seem to have settled on a tone, so the art gives it that tone. We know it will be wacky adventures over nightmare situations.

It turns out that Barney isn’t a friend. He’s a spy. I cannot tell if he’s supposed to regret his action at all. Or if he agrees with his bosses, who he does seem scared to confront.

Jane is going to kill Barney when she finds him. And unless he splits town, it isn’t like they work together or something. This town isn’t that big.

Likewise, the other dimension seems to be pretty small. At least Gardt has been found out in his helping of the humans. He doesn’t get to keep his LA Law trapper keeper either.

Heather’s story to Chip about why she and Jane stopped being friends was okay. I’m not sure how well Heather’s substitutions for drugs and sex worked. I get that he’s her father, but they are both adults now. Her father also isn’t an idiot.

I will admit that it’s a tad bit disappointing that Barney isn’t working for some nefarious organization. No, he has a gambling problem and wants to sell the footage to pay off his debts. That shady person from your hometown is never your friend and will definitely turn you into your enemies, Barney; this is small town 101, but also yeah, I too have trusted the wrong person.

Sure, I guess pastries and other goodies make up for everything Heather’s ever done to Jane.

I want Heather’s mom to be secretly working for the shady people.

Of course, Chet is running this otherworld, and he doesn’t want other humans to discover it. While he has ultimate power there, and ultimate power corrupts. I’m not very charmed by the shtick of Gardt and his lawyer and talking skull friend Klay.

I guess the next step is to fight the monsters that those troublesome punks let go in the human world.