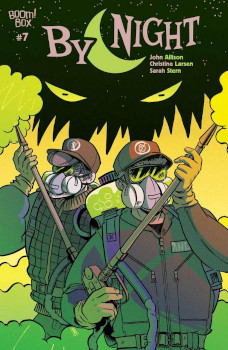 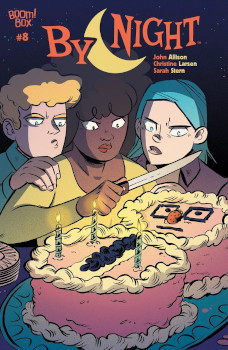 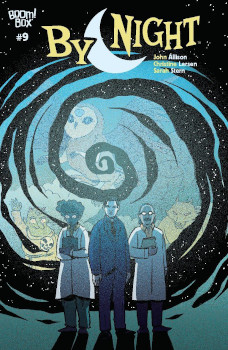 Barney rather miscalculated here. If he wanted to hire a protection gang, he should’ve gone with Heather and Jane. I mean, he also should’ve known that given how he saw them fight random monsters in the OtherWorld.

Chip always seems to be in the right place at the right time. Or knows enough to be handy. I’m not sure how I feel about Allison continuing to have Chip show up in time to save everyone.

The footage being destroyed on the thumb drive felt right. Same with the crew dismantling the portal equipment. (Though what will happen to Gardt?)

Of course, the giant crab creature can talk. Of course, it was plotting to destroy the world and then take over. Of course, Chip and his brother Andy’s bug exterminating equipment came in handy. Why do you need a flame thrower indeed?!

Allison left us with the classic horror trope of — oh, you think everything is okay, but there’s secretly a cache of eggs they missed. Will they come to life in the remaining issues? Or be a reminder to creep you out at night?

Barney remains the worst, but at least he’s getting his social ostracization.

I’m not buying that Heather, Chip, and Andy could build one of the dimension portal machines all by themselves. Sure, they have blueprints, but it just seems that the Eidolon would be more complicated than someone could whip up in their garage over a weekend.

Does Heather not want to ship things on eBay? Or is she saying the Bellingham has better vintage markets to find goods in than her hometown? I was confused by this.

Of course, Jane’s mom Brenda is the character who knows what’s going down. She seems like the most regular character, but of course, she isn’t. I’m surprised how much Jane didn’t have to coerce Brenda to talk, or at least say she would talk about the other dimension.

Brenda finally opened up, and because of that, this book has a direction toward the final issues. But here’s my problem, Brenda gave us a lot of exposition, and it all seemed a little too late. Additionally, it didn’t appear like their shared knowledge and experience visiting the OtherWorld would bring her and Jane closer. Jokes about the comic code authority aside.

I did love Larsen’s and Stern’s art efforts on the flashbacks to the lab under Chet and Brenda and the rest of the team exploring the OtherWorld. The coloring and style changes were incredibly effective in conveying the two settings (lab and OtherWorld) and their moods. I enjoyed the touches that flashed back to the 80s, including a different Gramercy. (Who I always suspected was a douche. Even if putting those military guys right through the portal and into the jaws of death was probably the best call to make in the moment. However, if Chet survived it enough, I suppose they could’ve survived it too.)

The small town jokes continue to be on-point. Of course, Chip would’ve had a relationship with the lawyer hired by the government to shake him down.

Now they must learn from their own mistakes, keep the equipment away from the military, and also stop Chet from oppressing those who live in the OtherWorld.