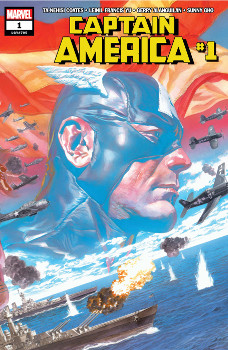 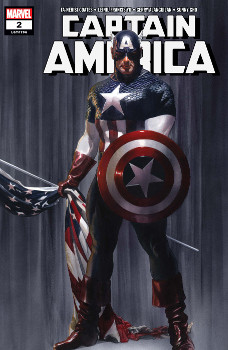 Captain America is one of my favorite comic book characters, and it’s been hard to be a Captain America fan for these past several years. At least in the comic books. Thanks, Chris Evans, for holding down the movies.

In comics, Nick Spencer make Captain America a secret Nazi. Okay, surprise, the twist was that it wasn’t actually Captain America. We’re not surprised because Spencer is Spencer and that was some unsophisticated, boorish, and Nazi-serving writing.

(PS — Nick Spencer, if you ever happen to read this: reviews are for fellow comic book fans, not you. Don’t call me.)

Marvel has tried to do some redemption by putting Coates on Captain America. Which having read a lot of Coates writing, including his prose books, I’m curious to see where this goes. Steve Rogers has certainly spent a lot of time questioning his government in past series; and while it seems like he’ll be on the right side of history, under Coates’ pen, the American public isn’t sure of him any longer. Previously, when the public grew weary, it was because Steve believed the government was wrong and was following his moral code, not because the public generally mistrusted him.

This issue didn’t knock it out of the park for me. It was solid. It served Steve Rogers correctly. (One time, Steve Rogers dated Wanda in one of her magic spells gone haywire around Avengers Disassembled, and let me tell you, I raised by eyebrows, but this is not what I mean by “correctly”; mostly I mean, in the spirit of Jack Kirby.)

Let’s talk about the art. Sometime 10+ years ago, when I still read crossovers and Bendis’ books, I first encountered Yu’s pencils. He was the main artists on a crossover featuring a Skrull invasion. The Skrulls are shapeshifters and had infiltrated the Avengers, SHIELD, etc. The problem with Yu is his faces all look the same; in 10 years, he’s grown a little, but they still look too similar, especially the women. I’m so happy that they explained Sharon is supposed to be old, because I couldn’t tell if it was on purpose, or Yu’s sketchy pencils creating all those wrinkles.

Yu’s pencils were also clearly rushed on this extra-sized issue. There are lacking backgrounds everywhere, which means Captain America’s world isn’t grounded. There’s no sense of place. Is this everywhere America? Or DC? Or NYC?

I just adore Captain America, and Coates gets a lot about him. His character shines here in ways that I always feel T’Challa is still aloof as a character in Coates’ Black Panther. I do wonder if maybe Steve is more real to people — real with personality — because of the MCU and due to the multiple Captain America movies. Not to mention Chris Evans basically living up to the spirit of Steve Rogers in everything he does. Maybe after multiple Black Panther movies, we’ll feel this way about T’Challa. I do love Chad Boseman.

Also, all of my very favorite Steve plotlines have been about him leaving the service of the US government due to his principles. I’m a sucker like that. That’s why I love Captain America, and despite everything done to his character recently, he remains one of my favorite characters. I’m excited to see Coates tackle head-on other writer’s plots that made Jack Kirby roll in his grave.

Unfortunately, Yu’s art remains incredibly distracting. His style does not lend well for expressions and expressiveness. I would’ve loved to see someone else pencil these emotional scenes between Sharon and Steve.

Also — why aren’t Sharon and Steve having sexy times on panel? Like give us a them in bed the morning after scenes! This would be so empowering, and I feel like Sharon’s sexiness is being hindered somewhere in editorial. If Wonder Woman can sleep with Steve Trevor in the Wonder Woman movie, then Steve Rogers can have sex with his long-time girlfriend.

My two wishes for this book: a better artist and sexy times for Steve and Sharon. (And maybe not have Sharon kidnapped as that halts possible sexy times.)

PS — Not a fan of Alex Ross’ covers either! We disagree about Steve’s body shape.

The ever-changing artist crew that put this book together also threw it off. The art isn’t bad per se, it just doesn’t push the annual much beyond a WWII nostalgia showcase. Not that I ever object to killing Nazis, though we also have some Nazis in 2019 that need attention.

What is explicit in this story is Steve’s and Bucky’s acceptance of people; people who in WWII the “heroes” might’ve rejected, even if they are escaped concentration camp prisoners. Namely Volya is a gay man and Marta is Romani. We don’t really get to know anything about Iskra, even if my bet is that she and Marta are girlfriends. But perhaps the point of Iskra is that mass murdering authoritarian regimes just kill people.

Steve’s interactions with them, particularly when Volya came out to him, made me tear up, because that’s how I have feelings about Captain America.

I’m not sure the point of Bucky in this story. Steve also carried a gun in WWII; so even as the guy who shot people, he didn’t serve a purpose. Bucky is also rather undefined in this era. He’s a kid sidekick in a world where kid sidekicks aren’t as innocent as they were. Or at least we have more questions about why Batman and Robin shared a bed. But Bucky — kid Bucky — will always be innocent.

Dum-Dum Dugan is always ridiculous. Him showing up at the very end to save the civilians was very in that vein. However, I’m not sure the tone matched with the rest of the story. I suppose it would’ve ruined the mood if Captain America and Bucky hadn’t gone back into the fight against the odds, and if anything tragic had happened with those three civilians.