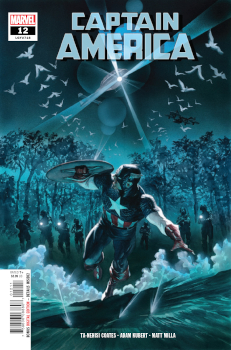 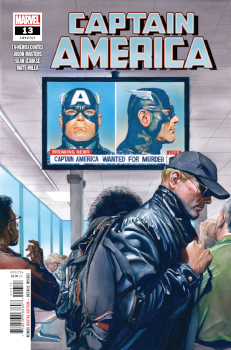 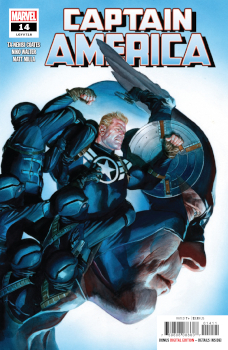 And who doesn’t love Aunt Peggy?

I love that Peggy still has her connection to Sharon and Bucky. Oh, Bucky, he gets to know all the sides. Though he hasn’t talked to Steve since Steve broke out, and he breaks the “is this only ladies?” team.

Not sure about this working in the shadows angle, but mind-sucking someone, even someone as evil as Stucker, definitely falls into the gray category. As is Bucky being contracted by Fury to hunt down Steve when you know exactly where he is.

Speaking of Kubert’s art, it’s everywhere on Steve’s face. It’s like Kubert cannot figure out what Steve looks like. In the moments post-shower where Steve and Sharon converse, Kubert draws both Steve as young and smooth, and Steve with as many wrinkles as Sharon. And this doesn’t even include the shape of Steve’s face, especially his nose.

Sharon’s right that Steve needs to show his face when fighting and be Steve Rogers, not Captain America. Steve needs to prove which side he’s on without obstruction. Especially since it’s not like he has a secret identity anymore. (I also imagine Bernie pulling her hair out about right now.)

Mockingbird’s line about Steve not getting to call them “chicks” was perfect.

Despite the inconsistent art of having two main artists on this issue, this was possibly the best issue to date of Coates’ Captain America run. It feels like Coates is leaning into a subject — journalism and public relations — that he knows well to find redemption for Steve. Even if we still have Alexa and Aleksander/Red Skull in the background, this is a smarter plot.

Okay, if you are texting back-and-forth using your codenames as the text “to/from,” you don’t use each other’s real names in the text’s content! We know enough of who the characters are since the reveal that Dryad is Peggy. For super spies, Peggy and Sharon are super sloppy.

I kind of like the switch back to their regular superhero names. Trying to track code names based on Greek goddesses and having some of them be “-1” or “-2” was confusing.

It is nice to see a story where a very powerful white man (Captain America) steps back and lets other people, especially women, including women of color, be in charge. This tone is one I can buy. I get that perhaps Steve has ignored things at the border, but I’m not sure I buy ignoring it this much.

Dryad leading Fury and team into a trap was perfect, considering we know which side Bucky’s on.

When it doubt, go to Mardipoor. I have to admit; I was pretty surprised that Coates’ comic was going to go there with mass murder. Nope, we’re getting mass enslavement instead. Granted, death and slavery are the ends of locking people up in America, whether AIM Nazi organization or just ICE.

Not sure how I feel about Steve using a slur against Native Americans in his internal dialog, even if he’s repeating Watchdog’s racist jargon to work out how to fight them.

I also think the inner dialog cuts through some of what we should see in the art. The art that once again changed hands. I thought Masters (from the last issue) was going to be the continuing main artist for this arc. I guess not. Walter’s art wasn’t bad, however, I don’t think it was sophisticated enough to carry a story that was mostly art. Will I ever be happy with a Captain America artist? Maybe not.

I appreciated the acknowledgment of how many men fought in WWII, who were there just to kick someone’s butt, and it so happened that they were kicking the butt of evil. Though every time someone brings up John Wayne as any American male ideal, I just want to rant about how he dodged the draft in WWII, not because he was a pacifist, but because he noticed when other male movie stars went off to fight, they were forgotten about, got less famous, and had a hard time booking new movies (if they survived and came home). Yep, Wayne dodged the draft to stay famous. Then he and his buddy Ronald Regan turned in “communists” to the FBI and HUAC to get more power in Hollywood and ultimately help Regan win the White House.

Back to Captain America — I guess we’ll see where this side plot with Fury and SHIELD goes. Not reading other titles leaves me a bit in the dark about the current state of things, which a lot of details in Coates’ writing is influenced by as he’s always incredibly well researched.

Dryad is going to have to reveal herself to Steve sooner or later. He may be following them, but he’s going to want to see the whole picture even if it’s gray, even if it hurts.

I do love Echo and White Tiger. More of them in all comics please.