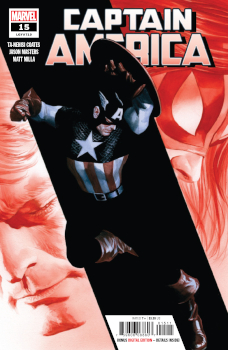 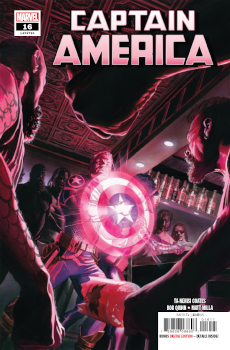 Ummm, so we were going after the migrants, who were kidnapped and are in Madripoor, but now we’re taking a side-trip to go after a cop killer? One cop killer that we’re supposed to recognize? I don’t.

Monogamous people are weird. I feel like Sharon should be acting more off about Steve being around Peggy without knowing her than getting jealous of Bernie. I’m glad the issue had them talk it through, and Steve apologized. Sharon was right that they do have secrets from each other, and she’s done a lot of waiting for him.

The scene between Bernie and Steve was probably my favorite. I like how she said that people have to save themselves, instead of waiting to be saved by Steve and other heroes, but how Steve’s going to try anyway because that’s who he is.

Not sure what I make of Toni’s remarks about age differences in dating/marriage.

It is, however, rather neat that all the baddies are loosely affiliated, and all roads lead to the same place no matter the crime. Except maybe this fellow in white.

1. I’m supposed to believe that, above all other things, Captain America cares about cop killers, or “monsters” as the text says? No. I don’t buy it. (Yes, even if Steve had a stint as a cop.)

2. I’m also supposed to believe that an explosion would assassinate Wilson Fisk? I assume the Daughters of Liberty know about his superpowers, especially Echo, who is from the Daredevil world.

Again, I find myself wishing that Coates would’ve just written off Spencer’s plot, and we didn’t need this scene with US Agent. You’d think of all people he’d dive and dig into the truth. Plus, John would have the kind of contacts that could tell him about the clone of Steve. I don’t buy that a former Avenger wouldn’t be able to make a call easily. Or that Steve (or Sharon) wouldn’t have reached out to him personally.

The action scenes were rather wanting, and I don’t care about these dead red shirts, I mean, rookie cops.

Aren’t there other heroes to deal with the riots in NYC? To deal with the NYPD? To search for whatever happened with Fisk? But instead, we’re supposed to believe everything ties neatly together with a bow, and that the missing migrants are the same conspiracy as Angel’s death.

Because Angel was the only “good” cop killed in this cop killer plot. (And I guess now Tony.) The rest were these rookie red shirts, who seem to be Watchdog. I don’t believe Coates’ text wouldn’t make the connection to how many real-world US cops are also members of white supremacist organizations. But I can see Marvel editorial leaning over and saying no.

Do you know who is a vigilante and would kill corrupt cops? Punisher. But then Marvel would have to deal with the Punisher being an ideal shithole for real-life men who imagine themselves to be Watchdog.

Instead, we’re getting an entirely new player named the Scourge. And because he killed some of the cops, we’re going after him.

It was nice to see a grenade have some effect on Steve.

So Steve jailbreaks, but then everyone hangs out at the Carter estate? I don’t believe for a second that the government wouldn’t be on Sharon to search up and down for Steve. This whole hiding out thing has gotten less stealthy, especially compared to the fancy Wakandan ship.