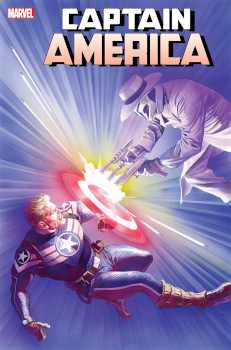 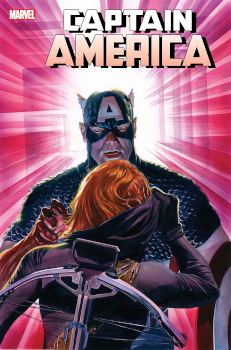 The thing for me is that Coates has set Steve up with an all-woman team, but at the end of the day, it’s Steve’s show. Jessica’s pheromones kick off halfway through her trying to calm the crowd, which means Steve’s words have to save the day. Even as Coates attempts to subvert narratives around Captain America, we get a white man in authority who connects not just with the riotous people, but also the cops.

The cops trust him so much that they tell him where the shooter is and request his help. They also make a joke about how shouldn’t they arrest him. Which Coates rather needed to spell out why Steve was getting treated differently than just having that line.

I really don’t like that Steve was creeping on Sharon’s text messages. I get that he’ll soon learn who Dryad is, but seriously, this seems out-of-character for him. The lady is a spy; she has her secrets, and he knows it.

U.S. Agent always gets the short stick when it comes to comics. Masters’ art in those last few pages was very rough and sketchy. It looked like a first draft hastily put together compared to his other work. Until I looked at the credits, I actually thought the artist had changed.

Here’s my thing with Coates: he always posits an ending that pegs an interesting idea to where he’s taking the comic book in the future. It’s the middle stuff that leaves me cold, and ultimately, leaves me unsatisfied with his comic book writing.

I loved this acknowledgment of Steve and his need for a team. How evenly measured he was when he finally ran into Peggy after Agatha showed him the Daughters of Liberty and their origins.

This issue explains a lot of weird things and missing threads about this book. They took part of Sharon’s soul — though I’m unsure what is happening to her because of that. Perhaps it is why Peggy is alive or Aleksander is alive. We get this return of Captain America, or that the myth is healed enough. But is it?

We get the team having enough of their lives messed up by Alexa. This issue, this issue I like, but I only feel like I will be disappointed going forward, and I’ve made the decision to pull this off my reading list.