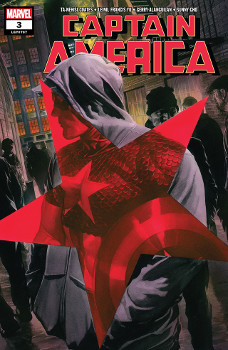 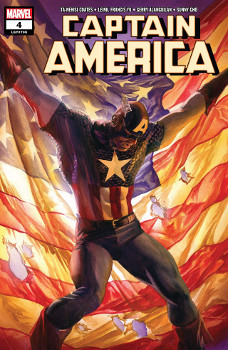 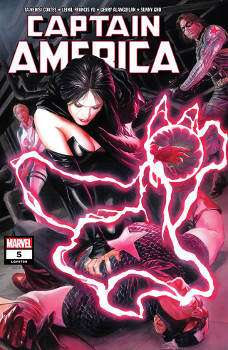 Too bad the reveal of who the character who ordered her kidnapped was foiled by Yu’s art. I don’t know who that lady is, and if she’s supposed to be 80+ or like in her 30s. But she has a cape!

Pretty sure she was one of the villains on T’Challa’s screen of Hydra evil bosses, but they lacked name labels. Name labels can be so cheesy in comics, but sometimes they are so useful. Give everyone name tags please!

The rest of the plot was rather meh. Coates’ fake out of having Steve go undercover as a New York Times reporter to that one Trump bar in coal country wasn’t entertaining. Same with his interactions with T’Challa and seemingly being happy to go work with another government.

I get the metaphor here. That even if the “big boss” has been defeated, there are many more at different layers of the US government and around the world. If Trump isn’t reelected, or if he’s impeached, we will still have the minor bosses and the people who put him into power and supported his ilk to deal with.

Oh, it’s Selene. I hate to say that she’s never been a character who’s interested me, and she’s a character I always forget exists immediately after I’m done reading whatever issues she’s in. Will Coates make me care about her? Probably not. One thing I haven’t seen him do in the fiction I’ve read of his is make a villain sympathetic in any matter.

I don’t know if I was particular dense, or if the story doesn’t suit my curiosity, but I found myself surprised to find Cap in the same building as Sharon. I don’t know where I thought he was — maybe still beating up fascist, ‘roided out former coal miners — but I didn’t realized T’Challa and company had taken him out of the United States.

I guess you have to stall for time, but I still don’t understand why anyone sends their minions to try to stop Cap. Like it’s just not going to work, and they are going to get hurt. Or worse. Though Cap probably aims to only knock out people instead of outright killing them.

Taskmaster has always been one of those villains-for-hire, and at least in Christo Gage’s Avengers: Initiative, he had kind of reformed. Reformed in the way maybe some of the Secret Six did. I just always assume that anyone going after Cap is probably somehow a Nazi, and I grew rather attached to Taskmaster in those aforementioned Avengers books. Not sure what I’m supposed to do with his appearance here.

What I do appreciate is Coates taking to task General Ross. Often times in Hulk books, he’s painted as truly a good guy deep down who maybe got mixed up in some unsightly stuff. But that’s not who he is, or at least that’s not his legacy playing out here.

Wow, this book is still not doing anything for me. It’s not adding to Steve’s or to Sharon’s story. Nothing really even seemed to happen her beyond Sharon getting saved. She apparently didn’t even get hurt as Steve tells Bucky she came back as healthy as if she was at a spa vacation. Though I imagine the hospitality would’ve been a little better at club med.

No one is surprised Steve beats Taskmaster. I don’t think this is the first time someone with a lot of combat experience, in a lot of different styles, has won against Taskmaster.

I am curious to learn more about who the blonde portal-making lady is. Selene felt one-note again. I also feel like we’ve seen this Red Skull inside Aleksander Lukin plot before.

While I’m always happy to see Bucky, I wanted some Sharon and Steve intimacy time. Some of Sharon dealing with Ross, her boss, having set her up, or at least the appearance of it. I’d hoped Coates struggling to give his female characters more texture was just due to the big ideas in his Black Panther stories, but now I worry that it’s a trend in his writing.