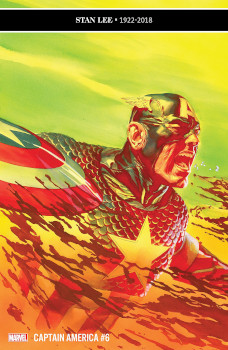 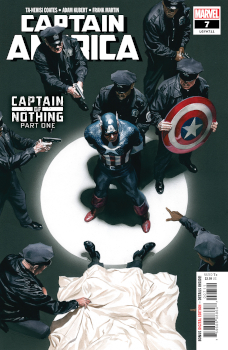 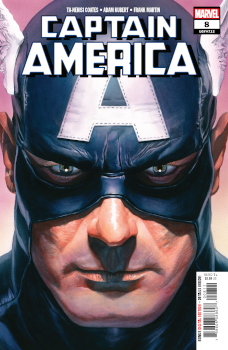 The entire reason Sharon and Steve weren’t banging all night — or Steve and Bucky — is because Steve needs to lack an alibi to be blamed for General Ross’ death. Well, isn’t this unrealistic? Seriously, who brings their girlfriend home after she’s been kidnapped and then is like “you know, we’ve been spending too much time together, and I need a night off?” That sounds like human behavior.

Also, Steve isn’t getting any benefit of the doubt.

Okay, I get it. Aleksander is also the Red Skull or brought the Red Skull back with him from beyond. Yawn. Also, his wife/girlfriend’s name is Alex? Are there not more names in the universe? Is she supposed to be Grand Duchess Anastasia Nikolaevna? I assume this is why we’re involving Rasputin?

Yu still draws both Alex and Sharon exactly the same, plus or minus wrinkles, though I do like Alex and her beanie.

I was wrong. Steve and Sharon did spend the night together. Though I don’t know why Sharon’s testimony would be considered so compromised, given her good status, and how Steve’s is mostly a PR problem.

I mean, I will take Coates coming for the American love of tax cuts and how terrible the private prison system is. Of course, Baron Von Strucker somehow gets to be in charge of a private prison that is made to keep in super-powered people. I would say it’s surprising that a white supremacist would be put in charge of a for-profit prison, but it’s not. That’s who runs all prisons in the US.

I wanted Yu off this title. However, Kubert isn’t much better. I’m not sure what he thinks Steve’s face is supposed to look like: besides an incredibly square jaw. Like SpongeBob SquarePants square. Also, Sharon’s age is well — all over the board. Is she the crypt keeper or like 50-years-old?

Of course, Steve will turn himself in, though I don’t understand it since he’s been on the run before. Even Captain America can’t always believe in the American government’s versions of justice. Also, you’d think Sharon — or someone — would do some investigations over where he was sent, and even in American injustice, it seems like you could get out of being sent to a prison run by one of your long-time mortal enemies. This part of the story didn’t flow and work for me, except that we already got the setup that Steve’s going to be in Strucker’s private prison.

Yikes. Welp, I’m confused about what is happening.

I assume “Steven” is the Hydra clone. But who knows since we just saw a very violent scene where Steve was broken. The T+ rating on the book seems light. I suppose this is just the world we live in where everyone is desensitized to violence, but if someone swears, has sex, or there’s nudity, it’s ADULT. We couldn’t have a Sharon and Steve intimate scene, but here’s Steve dripping with blood.

Also, I’m not saying Rick Jones isn’t a fair example for Coates to place his thesis on; however, it’s also Rick Jones. (Rick Jones is a Mary Sue stand-in for white male Marvel audiences, and he happens to be friends with all the major superheroes since the 1960s.)

Sharon and Fisk’s conversation was probably the only part of this issue I enjoyed. However, since I don’t read a lot of the other Marvel books, I was surprised (or unsurprised given it’s Fisk) to find him the Mayor of New York. I bet he’s not wasting his budget on putting cameras on every turnstile in the MTA.