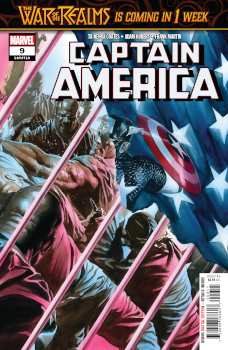 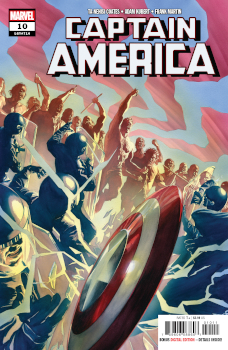 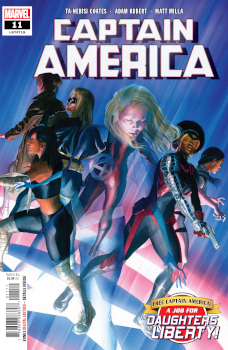 This issue was marginally better than the last one. I’m not sure what I think about Steve’s voiceover and his omniscient narrator who knows what Sharon’s up-to.

It’s not surprising that I adore the Daughters of Liberty helping Sharon. Though since I don’t read superhero comics with the voracity I did a couple of years ago, there are several faces that I don’t recognize besides Dryad. (Dryad whose costume is all too similar to Black Widow’s.) I needed some labels.

Misty and Sharon’s exchange about her outfit was pretty good. Sharon is still a hottie.

The scenes where Steve’s eating in the prison cafeteria reminded me a lot of the art and the layout in Bitch Planet. From the words on the screen to what the prison guards wore seemed to be incredibly similar. I hope it’s supposed to be an homage, not a direct rip-off. I’m curious if other people noticed this as I didn’t see it in any of the reviews I looked up.

Strucker’s right about Steve’s weakness. He isn’t going to break like one of the traditional villains Strucker has made into his guinea pigs. Instead, it’s going to be harming Steve’s friends and family that will push him over the edge.

What was the point of having Steve go to prison if he was only going to break out immediately? They already knew Strucker was running the jail when Steve went into it. Is Steve not supposed to break out, but help keep the prisoners in and then get awarded release for being good? Even Captain America cannot take on that many super-powered individuals — several of whom want him dead — by himself.

I guess that perhaps what I’m saying is I’d rather see a more nuanced story about prison reform here.

What I did not like was the Invisible Woman bullying Franklin “to be a hero.” It’s unclear if she informed him what would happen to his body, or if this whole line about him needing to pay his dues was his consent to something that made him very sick though it doesn’t seem to have killed him, or done any permanent damage to him.

With Crossbones and Sin in play, we’re likely going to be getting more of Aleksander as the Red Skull. I hope there are some terrible “who’s your daddy?” jokes. But probably not as Coates doesn’t seem to write humor.

Are you a father of a daughter? The ending read like the only reason Steve respected women is because of the relationships they can have with men. It was so weird.

I do not understand why the Daughters of Liberty were running two critical missions at the same time. Not when both of them were messed up. Dryad failed to get the Foreign, but she didn’t die from Crossbones’ missile. And Steve’s escape was somewhat chaotic.

Sue carrying Stucker in a bubble was pretty great.

I appreciated that Jack O’Lantern clocked Steve, and the baddies got away even if Steve’s narration about the scene was, again, weird.

Good to see Sharon back in her uniform. But again, I don’t understand the point of putting Steve into prison — of him lamenting not getting his day in court with Bernie defending him — if they were going to break him out. He wasn’t even in prison for a whole six-issue arc. Granted, I’m also glad he’s out because those prison scenes were boring.