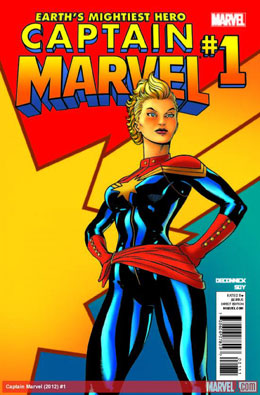 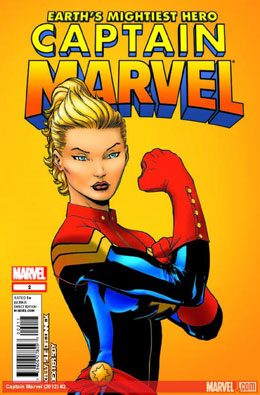 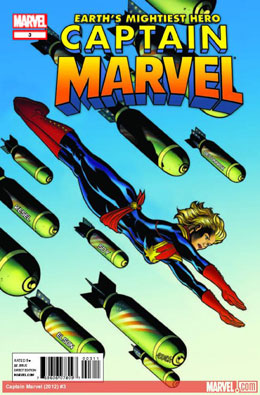 I’ve been waiting for this comic book for months. I love me some Carol Danvers, and I adore DeConnick’s writing. Big fan, right here.

I do have to say that it took me a while to warm up to Soy’s art. He’s definitely got a unique style. (And I so appreciate Marvel for taking a stab at different art styles, especially given DC and its Jim Lee problem.) I think Soy’s strongest stuff is in space and when they’re out of uniform. I didn’t so much care for the scenes where Captain America and Carol were fighting the Absorbing Man.

I love that Carol tosses aside Ms. Marvel and taken up the mantel of Captain Marvel. Win. I also adore Helen Cobb as a role model for her, more than just Mar-vell. And having her take care of Tracy Burke. I love when writers remember history, and since Carol’s history is just enough removed…and not debated amongst fans…that DeConnick bringing it all together only makes Carol’s story richer. Cannot wait for more.

This continues to be a really fun comic book. Though I feel very distracted by Carol not having a real hair style. Like I want someone to be able to actually replicate her hair in real life the way that Soy draws it. I feel it’s noncommittal hair. And I feel like I think way too much about it.

Oh, Carol, she really hates time travel. Which is why I think so many writers think it’s a good idea to do so.

I do like, however, that DeConnick gives her history. Sends her back to WWII. (And DeConnick playing on her strengths of being a manga translator.) The Banshees are definitely the type of women that Carol would hang out with and have guard her back.

I love that Carol ended up in this whole situation while trying to prove Helen Cobb’s record. I figured when Carol told Tracy the story that something bad was going to happen. Comic books and all.

Looking forward to the next issue.

I love her and the Banshees together. I love the variety of women that DeConnick has brought together. She does a brilliant job at spending some campfire getting to know these women. Such a great use of the pages.

Definitely interesting that there’s Kree technology involved. I’ve always hoped that some writer would have Carol interact more with the Kree — since it is part of her origin story — so I’m happy that DeConnick’s taking advantage of that.

I love a fun book, and Carol’s definitely going to be where the action is. Love that Cobb sells Howard Stark pieces of Kree technology in order to get back in the sky. Totally true that women were shut out of “men’s jobs,” and I like that DeConnick acknowledges that.

The end short stories are adorable. I love we’re taking time to show how many people love Carol.

Join Carol on her adventures, buy Captain Marvel Vol. 1: In Pursuit of Flight