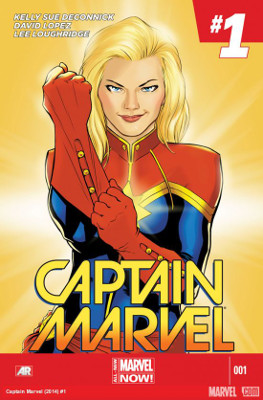 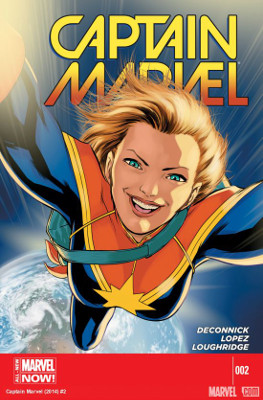 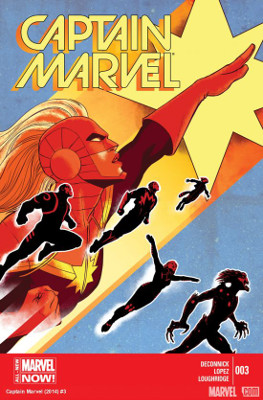 I’m super excited that Lopez is working on this book. I’ve been a fan of his art from Batgirl, and I think he’s one of those artists who understands how to draw adult women.

I’m glad the story flashbacked to how Carol got into space in the first place. For a moment, I was worried that it all started in one of those crossovers that I’m not reading. Phew.

I was happy to see Kit again. Carol living in the Statue of Liberty is a bit ridiculous, but not any more silly than the Avengers Mansion or Tower ever was. Comics and all that.

I’m a big fan of Rodey and Carol dating. I like them as a match, even if Carol says she’s hiding it because of Frank and then admits it’s because she wants to go into space. I kind of wanted Tracey to call them out on dating. Because that’s the kind of thing that Tracy would do.

Carol taking Tracy up in a fighter jet was very sweet.

Looking forward to DeConnick building out the new characters and keeping us loving the old ones.

Wow, I haven’t laughed that much reading a comic book in a while. I’m hoping that ‘flerken’ becomes the new swearword of the Carol Corps. I’m definitely all in favor of more Rocket the Raccoon and Chewie in a battle over who’s a menace.

Loved that Chewie started to mess up the message that Carol was sending to the ship. So much like what cats do all the time. And that he was too cantankerous to leave behind for Kit and her mom to take care of. His little carrier box is the best. Especially since he can clearly get out of it.

I almost think this chase to get Tic to stop stealing Carol’s ship is better when we know eventually she and Carol will become some kind of friends or allies. Plus, less worry about Chewie never coming back.

DeConnick is nicely balancing the exposition in this issue. She’s giving enough details about what’s happening in space without it seeming like everyone’s sitting around giving us more information. Maybe she should’ve written that opening scene for X-Men: Days of Future Past. (Err…yes, I am that far behind on reading my weekly pulls.)

I’m all for more fun in space!

Again, I just love this book so much. DeConnick has a wonderful pacing of story down, and it has all the best elements for a great story in space: love (Chewie and Carol), mission (save people from poison death planet), and raccoon cameos (Rocket).

Tic breaking down and crying and Chewie running to her was the best. Cats are assholes until they are needed emotionally and they know it. Oh, they know.

I also loved Lopez’s drawing both Tic and Chewie with the same facial expression when the ship rammed Carol. Good thing Carol has those nifty powers.

I’m liking Eleanides as leader of her people in the wise crone role. She’s the perfect mixture of diplomat, leader of her people, and someone who isn’t taking any shit. At least she does realize that the planet is poisoned and that’s what’s hurting her people. Eleanides just wants a better solution than to move, again. I’m guessing that Carol’s going to be going on a hunt for a new planet.