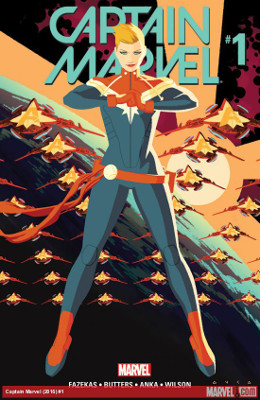 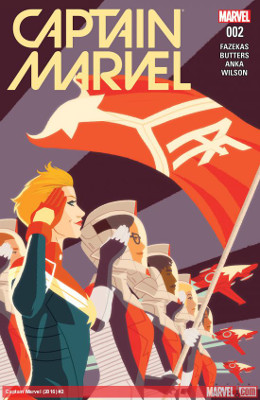 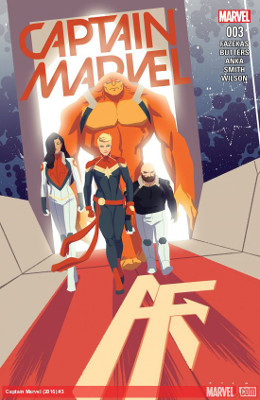 I wasn’t blown away by this issue in a way that I’d hoped to be. That said, as showrunners of Agent Carter, Fazekas and Butters write a consistently enjoyable superhero show on current TV, and I expect Captain Marvel to be consistent in quality. Which reading books or watching TV that might not blow your mind, but are consistently good, is it’s own kind of pleasure.

Because Captain Marvel itself has such a huge following, I do applaud Sana Amanat and the Marvel staff for their good choice in new writers. Particularly writers who have won this fandom’s hearts with Agent Carter. And I appreciate Fazekas and Butters knowing their audience when they make jokes about Carol’s hair needing a stable style or point out that Carol is her own ride home to Earth from space.

I don’t read the Alpha Flight books so I’m not sure how much these two will function as a tie-in to each other.

That said, not knowing anything about the plot of this book and going in to find out that Agent Brand is a major character made me really happy. I adored the moment where Carol mentions to Puck that Brand might be upset that she got the job instead and having Puck say Brand turned it down, was pretty brilliant. First, it shows the kind of character Brand is. (Her and Hank McCoy’s love story is one of my favorite cancelled-too-soon comics.) And second because it erases it as some kind a woman-to-woman fight over a top position.

I am interested to see what they do here with Aurora since she is one of the many female characters in the MCU who went crazy for no reason. And as much as I love Northstar, it’s nice to see her without her brother.

I was ridiculously excited to see Wendy.

This continues to be an entertaining book, but it’s not blowing me away. One aspect I’m having trouble with is connecting with the Alpha Flight characters. The writing seems to suggest that we should have a familiarity with them that I do think even most avid Marvel comic book readers likely wouldn’t have. I don’t find Puck’s comments as endearing as I think I’m supposed to.

There needs to be more jokes like the one about Sasquatch’s hair and Carol’s quip about how she cut hers before the mission for a reason. It’s nice to see some acknowledgement of tactical senses and getting dirty during missions.

Obviously, Wendy wasn’t the one who sabotaged the station or make all this chaos happen.

I’m really hoping that in the next issue Brand will be so annoyed with them being incompetent that she takes charges and solves all the problems. Because that’s typically what she does.

This issue didn’t seem as strong as the other issues before it. Double artist duty didn’t really help. But I’m not sure how interesting this mystery actually turned out to be. (I realize this isn’t the conclusion of it, but we did figure out why there were hala stars, that Carol’s weirdness was memories, and that those memories were from Mar-Vell.) I’d hoped we’d discover something about Carol and some clean up of her past self.

Nope. Just a war between the Kree and the Satori and some massive planet killing weapons. Ancient wars are a bit boring.

Also Brand better be able to get herself out of whatever happened to her in her quarters. She’s typically hyper-competent, which is part of why I love her so much. Like when Brand’s hologram self was the one to confront a mostly depowered Carol.

Oh, Carol, she really doesn’t know what to do when her body starts to give out on her.