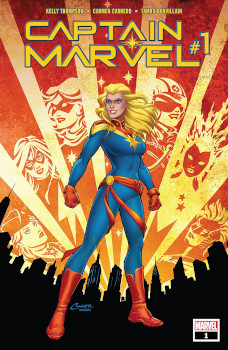 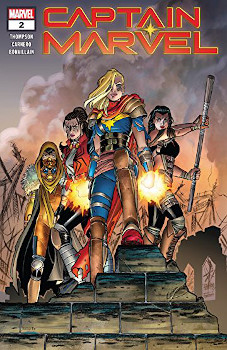 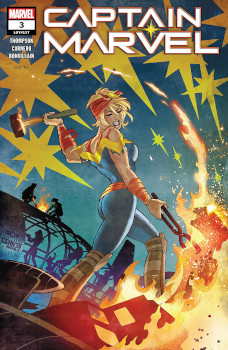 Here we go again. I’ve been making inroads on cutting down on DC and Marvel books, but we’re back for Captain Marvel written by Kelly Thompson and draw by Carmen Carnero. Both of whom I really like their work.

Things I really liked about this included Jessica Drew and Carol’s friendship, the jokes, and Carol’s AA sponsor and maybe friend relationship with Tony Stark. The jokes that mostly happened at Tony’s expense, which let’s face it, make the best kind of jokes. Punching all the way up.

Nuclear Man’s misogyny is a bit too over-the-top for me in a villain. Like, of course, the feminist hero must face a man who thinks all women are dumb sex slaves or dumb uglies.

I was hoping that even though Rhodey is back from the dead that Thompson wouldn’t hook them back up. It looks like I may be wrong. I do like that someone at Marvel finally realizes that naming a character, who’s a good guy, “War Machine” is perhaps a misstep.

Carol’s long-hair is silly, and I am hoping maybe that will change. I think those Revolutionaries we see teased — oh my god, I love their styling so much, and I hope Carnero can keep them just as detailed — are alternative universe characters, not Carol just changing her tune to defeat Nuclear Man.

Carol and long-hair make zero sense when it comes to her career and what she does every day. Unless her hair washes itself, all the cthulhu goo and more would ruin it. Her hair and her sash both seem so impractical for an otherwise practical character.

To me, Carol will always be a soft boi. Soft boi Carol and her partner Jessica raise their little spider-Kree babies and fight villains together. Stop trying to force long-hair and heterosexuality on Carol, Marvel!

At first, I thought this bubble was an alternative universe, but instead, it’s just Roosevelt Island turned into Nuclear Man’s personal paradise of dystopia. I’m glad it didn’t take long to clear up. There are also some wacky time things happening.

Som is definitely a red herring, or maybe an aspect of Nuclear Man. There’s no way only one guy has escaped. Perhaps he’s trans, or the only man exclusively attracted to men?

There are far too many Jennifers in this book. So it feels like the real world.

Echo is the best, and I’m so glad she’s here. Even if the bits with sign language and lip-reading are a little on the nose. Good thing Hazmat knows how to sign.

Because my style is “mayor of a post-apocalyptic town,” I’m digging Carnero’s designs on their costumes. I’m not a fan of belly shirts, but Jessica’s outfit is fabulous, and I would wear Echo’s any time. (Though I don’t love what Conner and Mounts did to Echo’s outfit on the cover.)

We’ll see where this goes. There’s no way that She-Hulk will just fall to her death.

Does your back hurt after being crushed by all that exposition? Me too! In general, I am a fan of Thompson’s writing, but here, there was too much trying to jammed in a tiny space, and a lot of telling us and not showing us anything.

Except when Echo dropped from the ceiling.

And it wasn’t just explaining what was happening on Roosevelt Island or the training montages and Carol worrying about the costs of war. It was even in scenes like the beginning where she saves Jen, which was an inner monologue on top of the action. There needed to be more balance between art and words here.

On the one hand, I get the editorial constraints of keeping the story into a 5 or 6 issue timeframe. You never know if Marvel will cancel your book. And maybe this is the tradeoff for Marvel’s policies — that Marvel books don’t get to have long stories with built-in worlds over time (which may on some meta-level explains why I find myself reading less and less superhero comics these days).

No one thought Som was a purely good guy. Even if he thought Carol could save them all, but good job on not telling her that until the very end, which seemed to be for plot’s sake and nothing else.