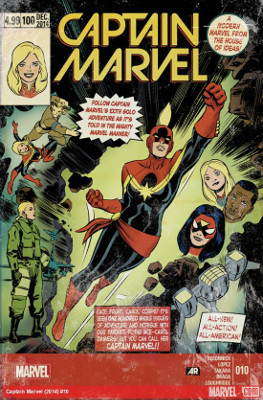 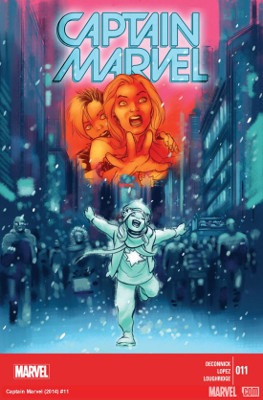 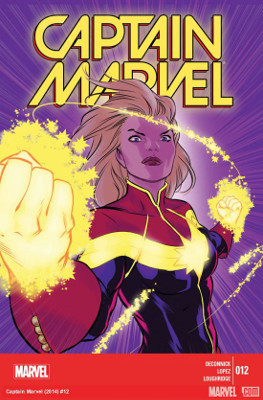 This issue was definitely fun, and a nice reminder of all the great characters that Carol has around her as family who she left back on Earth.

I adored the flashback to Carol and Jessica and the rat in her apartment. So Jessica to want to kill it and climb up on furniture, and so Carol to want to capture it and give it to the people who take care of those things. I did enjoy Carol pointing out their superpowers and how much they outgunned the little rat.

Loved Kit and her friends hiding from the rats. Just enough disbelief in them hoisting themselves up in the rafters to keep it a comic book, but enough childish mischief to balance it. Kit’s Captain Marvel cowgirl outfit was super cute.

Marina hiding by climbing on Jessica’s back was pretty funny. Especially both of them being so terribly afraid of rats. Jessica getting bit by the rat that was leading them all after all her hesitation was pretty funny.

Liked that it was ambiguous whether or not Carol actually removed the bomb from Rhodey’s back. Yeah, removing something from your back in an Iron Man suit would be pretty hard. Design flaw!

Glad that Wendy’s taking care of Tracy. However, I’m betting this next issue may be Tracy’s final run.

Cute little Christmas tale. I’m glad that Santa is still part of the MCU. And that the mythology is slightly expanded to allow to Santa to take over any Santa’s body to save Christmas.

Lila freaking out about not having any gifts is typical her. I love that Carol, despite having many friends, chooses to spend her time at Tracy’s side. And that she kneejerks to correct the nurse about Traey not being her mother, but then really can’t fully do it.

Seems convenient that both Grace Valentine and June Covington immediately find Carol. (Though it makes me happy to see DeConnick getting to write June again. June is a great type of evil lady that we don’t get to see a lot of in literature.) That said the whole kidnapping was a little ridiculous, a little too much a Christmas miracle.

I did, however, love the ending moment where Carol destroys the bombs and Tracy wakes up just long enough to see her do it.

And there goes Carol blasting into space and fucking up because she’s all action and not further thinking about her plans. I guess that contacting Jackie and Gil was some kind of foresight and somewhat listening to Harrison.

Wasn’t as enamored by Harrison and Carol’s back and forth dialog. Also whomever made the decision to make Harrison’s text boxes black with green lettering needs to get in some serious trouble for terrible contrast. Not at all accessible, and with my glasses, technically my vision is perfect. I can’t imagine how awful it would be for someone who was lowlight vision.

I assume that we’re not going to leave Tic in that prison for more than one issue. And poor Chewie with that terrible Bane-like muzzle. (It did make me pause for a moment and do my best Tom Hardy impersonation.)

Though it seems like Tic is making a friend. A friend who may make her regret being married to that prince.