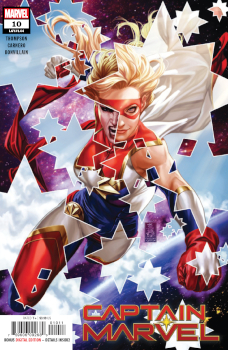 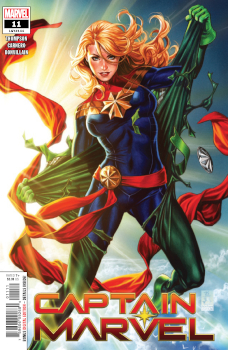 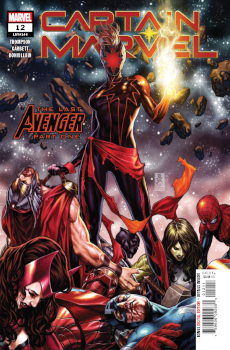 Yep, called the entire plot about Star. I really don’t like her “now I can be evil!” schtick. Like just be evil from the start. Maybe the only thing I was wrong about was Minn-erva being dead. This is a comic book, after all.

While I’m normally a fan of Carnero’s art, all three women — Carol, Star, and Minn-erva — have the same hair. Also, Tony’s clothing, while drawn really well, is straight out of the early 00s. It seems like he’d be a tad bit more stylish, even if men’s clothing doesn’t change much throughout the years.

So Carol tries to kill herself to cut the cord to Star. However, it turns out these devices are placed all over NYC and in a lot of people via the water supply — allowing Star to be powered up without Carol. They just should’ve dragged Star into deep space. Let’s hope that Agent Brand comes in to the clean up the mess.

I mean, that was a fine ending. I get how Ripley would want to give herself superpowers after what happened on Roosevelt Island. And I don’t know how I feel about her getting the powers of the Reality Gem. I guess we’ll always have that nonsense thanks to the MCU.

I thought the Avengers tore down the Raft? I cannot say I’m surprised it reappeared as American writers are just all about prisons. Though it felt wrong to have Tony Stark being the one to rally against taking Ripley/Star to the Raft.

The moment where the little girl stood in front of Carol to protect her was a perfect note of how Captain Marvel is a hero. She’s supposed to be inspiring, and she does need to do a better job at connecting with the general public.

We’re spelling Minn-erva now as Minerva. Okay. Tony’s just going to put drugs into the water supply to fix whatever virus thing Star released to draw her powers from. Okay. No comments on the morality of it.

Okay, I got a little spoiled for this by some Marvel ads for the tradepaperback, so I know why Carol is acting so odd and killing Avengers. Or at least who forces her hand.

I’m not a fan of random bad behavior from heroes — though it was an interesting way to see someone kill Thor. Carol doesn’t often use her absorption powers when it comes to destroying other heroes with their own powers.

Garbett is an artist that I’m a big fan of. I always appreciate the clarity of what they bring to their art. I was surprised by the giant battle swaths across the pages given that Thompson’s writing style lends to more dialog and thus more panels.

My favorite part of Garbett’s styling of this dark Captain Marvel is her war paint. Though in certain panels, her chin makeup looks like a goatee. While she’ll always be a certain type of beautiful and flawlessly rendered on the comic book page, I do appreciate the attempt to roughen her up.