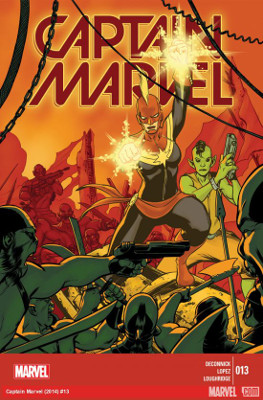 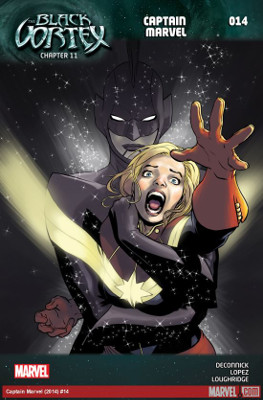 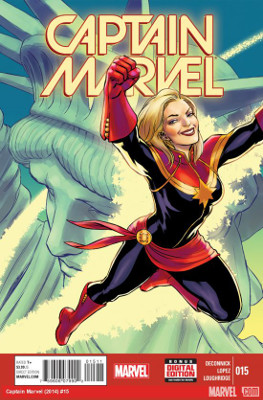 I’m not a big fan of the technobabble. It’s definitely an art. Especially to make it not sound like a bunch of gibberish. I got a bit lost while reading this. It’s also kind of unclear how advanced Harrison is as an AI.

I do appreciate the Tic and the other prisoners basically liberated themselves. Carol really only helped to completely secure the bridge. As someone who’s watched a lot of sci-fi, the precision targeting was amazing, and something I’ve always wondered about why more people didn’t do it.

It is sad to see Tic go. Seems like Carol’s space friends have quickly moved throughout the book. However, I know Marvel’s going to do all their relaunches soon.

Chewie seemed to be underutilized here. And for a moment, I worried that Carol would also leave her behind. Just for a second.

Good lord, I really dislike crossovers and these “big events” even under a skilled writer like DeConnick who realizes not everyone reads them. (Also seriously, how many times has Angel, from the X-Men, gone down the path where he gets some crazy powers and loses his free will completely. You’d think he’d learn his lesson!)

Thane is a really boring character. And badly designed. (Again, this is not Lopez’s fault. Someone else did that.) Ooh, he’s so scary because of his daddy. And that he wants the Vortex to rule the universe. What is new with major villains again?

J’son has always been a jerkface, which means not so sure why they had to remake him. He’s always sought power.

Carol already knows what it’s like to have cosmic powers and lose them and lose herself. It’s not surprising that she turned them down when face-to-face with a cosmic choice.

Damn this book. Like DeConnick writes in her outro letter, I am also not a crier. But if this issue didn’t make me tear up.

The grief that Carol experiences saying goodbye to Tracy was real and raw. Loved the flashback of when Tracy lost her partner Teddy and how Carol helped her move on. I thought it was perfect that all of Carol’s friends played that role for her.

I also enjoyed that Carol didn’t make it in time to be there when Tracy passed. Felt like part of Carol’s path and something Tracy knew was going to happen.

The beach ending was just perfect. I am going to miss DeConnick on this book. (However, I am happy that she’s going to be writing her independent books.)