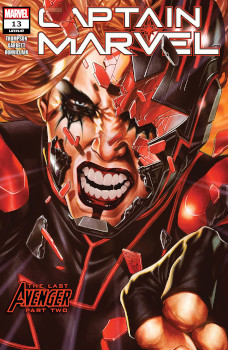 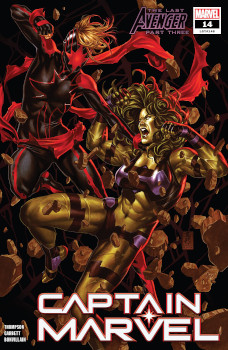 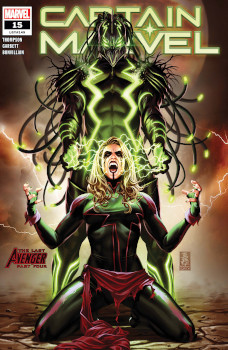 There are zero stakes in this book. Like, okay, you cannot actually kill the Avengers. That doesn’t work in how Marvel and superhero comics are set up and function. While sometimes I appreciate media without any stakes — certain sitcom TV shows, for example — this removes the emotions from the book. Thompson tries to prevent this from happening by showing us in this second issue that Carol’s actually killing clones of her friends, and that the trauma lies in how they look like her friends and her friends don’t understand what’s happening when she does it.

I also don’t understand how being inside Singularity makes Tony’s windpipe heal. Carol did crush it before she tossed him in, and before she switched him with his clone.

Garbett’s Iron Man robe was my very favorite thing in this issue. It was just too perfect for Tony and the exact styling I love to see.

I don’t understand why Vox Supreme would be killing the Kree in those camps. He killed the InHumans, but I figured that was some kind of pro-Kree activity given how the InHumans left them behind as oppressors. Though also, the spoiler I read was about his real identity or who his boss is.

I continue to not be a fan of this plot. Even if we get to see just a-okay Tony and Thor in the void of Singularity. (Now I’m just thinking about Janet on The Good Place, and I kind of want Singularity to complain in a similar manner. Let’s not just make it all about Vox Supreme’s countdown.)

Garbett’s use of crosshatching wasn’t my favorite. It felt confusing when used to make Thor look old and upset and then used for Carol’s eye makeup. Usually, one doesn’t wear makeup to look older. Maybe older, if one is young and trying to say sneak into a bar while underage. But this is just old.

Tony is right that the clones do have the DNA Vox Supreme seems to be after, which is still playing into his hands.

I expected more of Black Panther figuring out it was Carol and her powers sooner. However, a battle with Jen, who’s actually her friend, will be possibly more emotionally entertaining than this has been so far.

This is my final review of this run of Captain Marvel because I just cannot get into it. I know Thompson is like the only woman they have over at Marvel writing anything, so they must put her on 12 books, and that takes a lot of energy… But this book is just not good and not up to Thompson’s usual standard.

It’s also not fun. Not all superhero books have to be light or funny, but this is a downer. Except for Tony’s bathrobe. Even Vox’s question about why Carol kept bringing him naked Avengers wasn’t funny. (And also, many of them have tech, so you’d definitely strip them naked to make sure you weren’t going to find a special weapon or something.)

Of course, Captain America tried to reason with Carol and then gave himself over to her to be killed.

And very obvious that Carol would be the last murdered Avenger to power Vox’s weapon. The others will now have to rescue her.