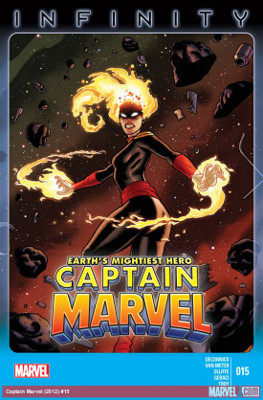 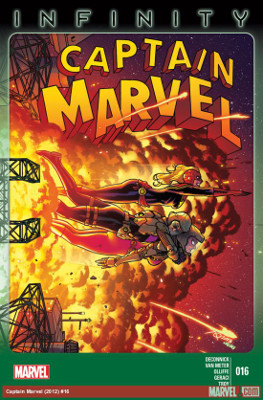 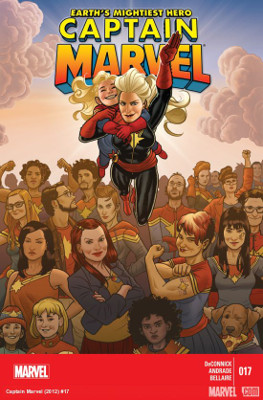 Not sure how I feel about Carol having her memories and any emotional bonds she made have made ripped from her. I mean, it makes sense that something had to happen when she died and when Yon-Rogg tried to take over her brain. However, Carol’s already had her memories (or her feelings about then) taken from her before.

I’m also not keen on the big crossovers. I’m never sold on them because usually they just pan out to not be very interesting.

Despite having no emotions, I’m glad that Carol helped save Jessica. Not that she wouldn’t. But it was risk.

And then we have some Binary action…

And apparently it’s only temporary Binary action as it has to do with the proximity to a singularity that’s activating her powers.

I appreciate that even with the enhanced power boost, the Builders do capture Carol and crew. That said, I don’t know what’s going on because I haven’t been reading anything in the main crossover. Like I understand less than I normally do, probably because I haven’t had time to read all the summaries on the internet.

Basically, my only thought is that I’m glad that Jessica and Carol kind of made up.

Making up for the last two month’s crossovers is this month’s double issue. Of course, then Captain Marvel‘s going on the shelf until April or so. I’ll never understand why we have to resort to selling more comics with #1s.

I utterly adore the twist on what superhero lessons are. Of course, Kit’s all about flying with Carol. But I love that she’s the self-declared expert on everything Captain Marvel and is going to teach Carol all about what’s missing in the holes in her memories.

Frank’s growing on me as a love interest. Probably because he offered to sleep on the couch, when clearly, he could’ve gone to her bed. I may have made Jacob sleep on my couch a few nights before he was invited to my bed. 🙂

I assume that Grace Valentine is being set up for the new villain in the next arc. Jealousy never looks good on anyone. I’m just not sure that I bought the flip from writing a feature for the magazine to being a CEO of a tech company. Except in that Carol has her origins in magazine writing.

I’m crossing my fingers that DeConnick’s going to bring the entire gang with Carol when this title’s relaunched. In the meantime, I’ll miss them.

Get your Captain Marvel love on and buy Avengers: The Enemy Within