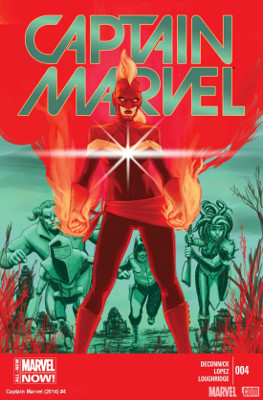 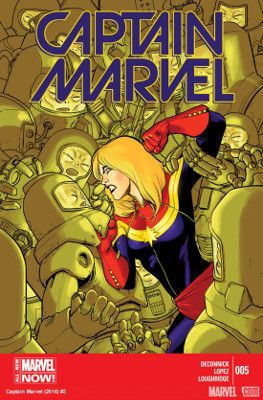 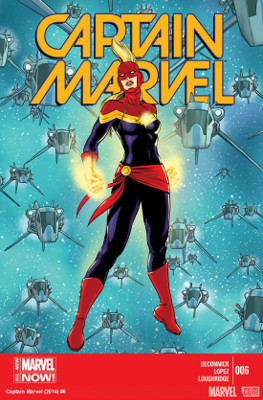 Despite the overarching very serious plot, this was a fun romp. Captain Marvel and sidekicks go to steal back some technology and ship parts that were stolen from them. Or from the world Carol’s helping out with.

Jackie is fast becoming my new favorite character. She’s just the right amount of sass and brains that I like. I’m still curious to know more about Tic and why Eleanides has put so much trust in her.

Clearly, J’son is just playing with Eleanides. Of course, in many ways, J’son’s actually doing what’s best for the people, just not in the most empathetic manner. Seems like the citizens will say something about J’son’s demands.

And they found Vibranium. Suddenly, J’son’s obsession with a seemingly nobody world makes absolute sense. I love Carol testing it by using her powers.

Not sure how I feel about Eleanides. I loved how she wouldn’t back down and how she’s told Carol repeatedly to go home and that this is not her fight. Of course, Carol never listens. I adored Carol’s internal monologue about how she’s a warrior and how Captain America would approve.

Is anyone going to go back for Tic? I’m surprised that Harrison and Chewie weren’t sent on that rescue mission.

While I enjoyed this issue, it seemed a bit light on the neat new characters that DeConnick just introduced.

I’m a little disappointed that Carol’s going off in space by herself without Tic, Jackie, Bee, and the rest of the gang. Sure, they need to stay and rebuild their planet, but they’re fun characters.

I was really happy that Torfa residents saved themselves. When Carol was facing J’son and his armies, I kind of expected the Guardians of the Galaxy to show up. Or maybe it was because there was an ad for them like every two pages in this issue.

Eleanides snarking at Carol about how she doesn’t take orders like a soldier was pretty funny. I really enjoyed how DeConnick has separated who Carol is compared to the other Avengers in what her actions and reactions are.

I didn’t quite get how it would take them 200 years to dig out that mine. They have advanced technology and people with superpowers. But whatever story, it was a nice resolution with a bow.