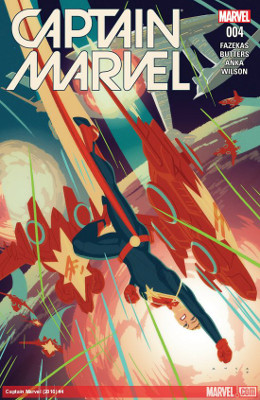 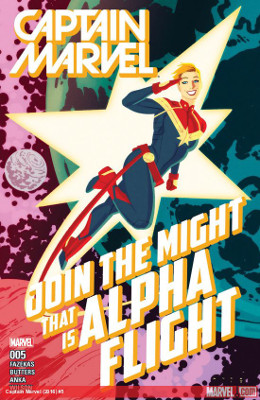 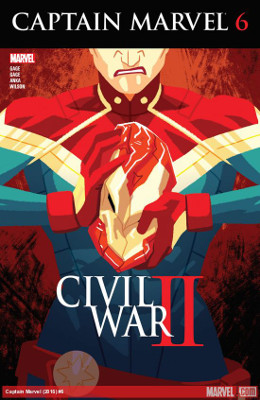 I’m trying to like this book, but it just isn’t holding me. I’m not excited for new issues. It’s not a must-read. I like all the characters in it: Carol, Brand, Wendy, and Alpha Flight. It just is kind of boring. It’s rather like an action adventure movie where all I want them to do is stop fighting and have some interpersonal interactions.

Like in the reimagined version of Wendy, why does Carol trust her so much? Especially when Brand’s suspicious of her. From what we know, Carol and Wendy don’t know each other at all.

I did like how Anka and Smith portray Carol as she runs around in space. That’s my nice things. Matthew Wilson’s colors are also very nice, but I tend to like his work.

I don’t mind Alpha Flight, but I want more Canadian humor instead of weird ways to hit on Carol or fart jokes. Please make some hockey, Mountie, poutine, or just being polite jokes. Like maybe ask Brand why she isn’t trying to communicate with the aliens by saying “Please.”

Give me a reason to care.

This book would take a lot more issues in order to really care about the characters. I wanted to like and was excited about Fazekas and Butters taking over. But it just didn’t quite work.

The main plot felt disjointed. The aliens were either completely invulnerable or totally weak, once Carol and crew figured out their weakness.

Puck is my least favorite character by far. He’s like that guy who lives to make gross jokes and save the ladies. Puck definitely shouldn’t have been the one to save Carol — after he disobeyed orders to follow her — because all his behavior is only justified by the plot. Seems like Carol, especially given her military background, would want to put him in his place.

Given Fazekas and Butters’ run on Agent Carter tv show, I’m not surprised that this book ended with Carol being so excited to leave the desk. And Brand right on her heels.

Who knows where the book will go with a new writers and tie-in direction.

A whole one star extra for Carol and Rhodey and their two hours of sex. Plus, Aurora and Puck both encouraging them to hook up since they had limited time together. It’s been awhile since I’ve read a superhero book that wasn’t Mature-rated with entirely appropriate for book rating bedroom scenes. Maybe when I stopped reading X-Men with Emma and Scott or She-Hulk under Slott? Anyway, it’s so refreshing to see two characters presented like real people who do real things like have sex on their dates.

I do want to know why Aurora’s head popped up in the alert for Carol. Seems a bit intrusive. Like does Aurora automatically see whatever’s happening in the room? They were only wearing clothing because this is a T+ rated comic book.

Dr. Minerva is a throwback. This run has been interesting as there’s been lots of stuff related directly to Carol’s powers coming from the Kree. From an accident with a Kree soldier (the original Captain Marvel), but I feel as though her Kree-origisn haven’t been used much in books more recently. On one hand, it fits with her being in space that it would come up more, especially when running the space station. However, it also feels like we should’ve moved beyond this.