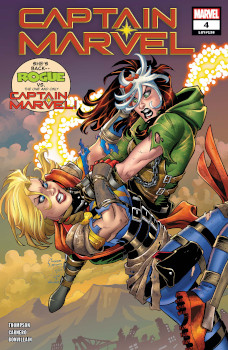 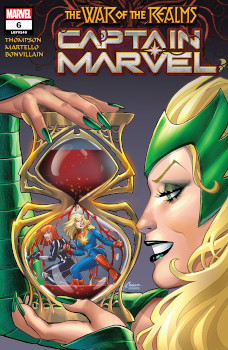 This issue is not great. The writing was not there. The drama feels melodramatic in the worst ways.

First, I’m not a fan of the Rogue destroyed Carol’s life plotline. It’s not one that needs to be dug up and revisited either. It seems to me like this entire experience is traumatic enough. We don’t need to recycle.

This transfer of personality was also handwavey nonsense. I’m not sure when Rogue’s powers meant that she’d be draining people by just being around them, but it’s been a hot second since I’ve read an X-Men comic.

Additionally, I hate these fights to the death show battles. They are boring. They are tired, and it seems like any character with some kind of super-strength ends up in one eventually. Nuclear Man’s misogyny remains boring.

The art’s still pretty good though it got a bit blurred toward the end.

So Ripley was Loki or Enchantress or someone sowing discord? At least that’s what I’m getting from that article.

I will put Carnero in charge of drawing all cats rubbing ankles. That’s so perfect. More Chewie always, though I suppose the flurken doesn’t actually need a human to feed him.

The wrap up with Nuclear Man was a yawn-worthy as him as a character. Hazmat spend a lot of the book worrying about what happens when she gets her powers back; however, nothing happens to her. She and Jen (Hulk) power up and fight the battle. Jen (Hulk) has a few moments of how she liked being without Hulk for a moment.

Som being a bomb and not making it out of his father’s mess was predictable.

I did love Carol with the whole not holding back and showing all her real powers. It’s nice to know she has even more potential than we’ve seen.

One whole star has been taken off because this is a The War of the Realms crossover event, and it’s not a very good one. I remember some writer saying that when they worked at Marvel, they never realized they could just opt-out of having their book put into an event. I’m sure there’s pressure, especially if your character recently had a movie, but yeah, this story isn’t good.

It tries to be clever and have Doctor Strange and Captain Marvel switch bodies. Which means neither of them knows how to use the other’s powers — which was the Enchantress play with the spell because she and Black Widow had a shared vision about those three heroes teaming up and taking Enchantress out.

However, the story mostly has jokes about Stephen now being in a woman’s body. I’m sorry, but he’s a medical doctor, and he has a shit ton of magic — and even if this is canonically his first body and gender swap (I don’t know if this is true) — I can see him playing with what Stephanie might’ve been like. He has magic! There were too many boring gender comments for me with Natasha as the annoyed parent.

I did appreciate Thompson’s note about Stephen’s disabled hands and the pain he must be in. Though even there — as someone with chronic pain — if I could magic away the pain, I would. And I’m sorry, if you can leap dimensions and fight pure evil to save all of existence, you can probably take care of your chronic pain. Sure, maybe you still have mobility limitations, but take the pain away! This is a little like when Star Trek couldn’t figure out if they wanted the common cold to be cured or not.

Martello’s art is pretty good. I particularly liked their design of Doctor Strange, especially his hair and bodysuit. I’m not sure if the new look is from other comics, but it’s well-done here.