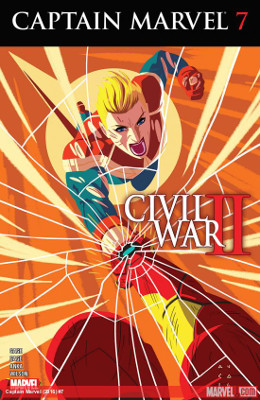 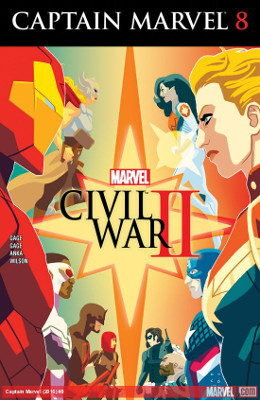 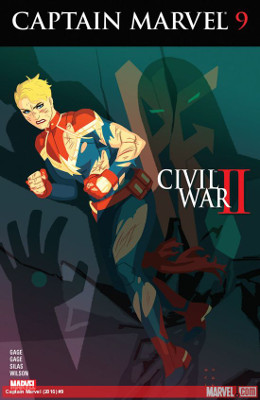 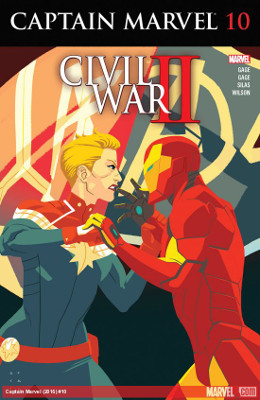 Yeah, this is a filler issue for more background for the giant Civil War II crossover event. And it’s weak because of that.

1 star for Failla’s art, which I do like quite a bit. People are expressive and their body language is great.

1 star for Carol dealing with her feelings about Rhodey. They are complicated because she mourns him as her boyfriend and a team member. But she also understands sacrifice from the point-of-view of a soldier.

But this does not make a great chapter in the Captain Marvel comic.

While I’ve never run a government institution like the one Carol’s running, I thought this was actually a great portrayal of what it looks like to be in a leadership position. Carol’s 100% right in her conversation with Hawkeye about who she can be completely honest about her own feelings with and who she cannot. She cannot second guess with Miles or Kamala. Carol can share pieces of herself with T’Challa. But it is Hawkeye, who’s under lock and key, that she can express all her concerns and pick apart what’s happened.

Someone definitely manipulated Stewart Caldwell’s Thundersword fragment to start collecting energy. No doubt, he also would’ve died had it exploded.

I did enjoy the acknowledgement that Carol just knows how to use her powers, even if she fully doesn’t understand how they actually work. And I’m glad that no dogs died. That would’ve been excessive.

I’m going to have to go read some Wikipedia to figure out just what the fuck happened to Abigail Brand.

Silas’ art certainly threw me out of the book. We’ve already had inconsistent art, but changing art every issue just tells me how much Marvel doesn’t care about this book. Like editorial has given up. (By editorial, I mean higher ups, not the direct editor on this particular title.)

Carol’s so oddly drawn on page two in the scene where she’s flying. All elbows like some tween that’s got a growth spurt, but hasn’t filled in. I’m not sure what anyone’s hair is doing. Good thing everyone has straight hair.

Magneto just kind of shows up out of nowhere. Yeah, like he’d tolerate anyone being locked up and not charged with a real crime. And Aurora’s quip would’ve been okay with any other character besides one that actually did survive the Holocaust camps. Give me a break.

I rather hate fake fights. Though it’s interesting that Ulysses can fake his powers.

The best part of this issue is certainly the ending. Carol reengaging with the people. They were the ones who inspired her to take up the Captain Marvel mantel, after all, and to become a better superhero. It is a nice contrast to see them supporting her, given the last arc.

That said, the rest of the issue was sloppy. The battle seemed unfocused. Not to mention, the art’s being drowned out by dialog. So much dialog. So many word balloons. Even if the Master of the World is an old school Bond villain, his dialog could’ve been trimmed. I found myself reading a panel, and then working to cut down the text itself. Editing is always a writer’s friend.

I’m sad to say that these creative teams haven’t gotten what made Carol so popular, and they certainly didn’t figure out how to incorporate Alpha Flight. With the exception of Puck, all the rest of the team was shallow and relying on knowledge of past Alpha Flight comics.