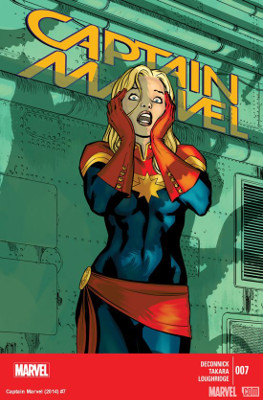 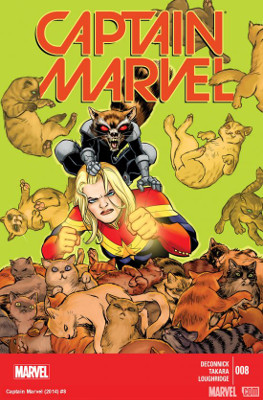 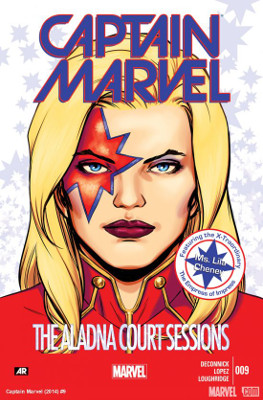 I like that the next set of our hero’s problems are completely created by one Rocket Raccoon. You just can’t trust that guy not to sell your cat. I cannot wait for the next issue with lots of baby flerken.

I love how they were all arguing and completely ignoring Chewie, who was the one trying to point out that there was a big ship about to attack them. Too bad Harrison can’t quite speak Flerken yet.

Flerken! Flerken! At Rose City Comic Con, DeConnick was asked how to tell if your cat is actually a Flerken, she reported that all cats are Flerken. They have come; and they have conquered my soul with their fluffiness.

Tic collecting all the kittens and remaining eggs into a giant barrel was too funny. I love how Takara overwhelmed the scene, yet it somehow made sense that Chewie would have 117 babies.

Goo monsters were a nice way of showing off Chewie’s dimensionally hidden tentacles. And then have Rocket either be in a mad envy or mad love with her.

Tic was completely right for telling Carol that she can’t just abandon everyone because she’s afraid they’ll die on her watch. I mean, didn’t Carol already kind of go through this when her friends all banned together.

I did adore Carol telling Chewie that she’s a terrible mom for abandoning all her kittens at the rescue. (Though I don’t really understand how they’ll be any safer than with Carol. I guess it would just be kind of inconvenient to have all those Flerkittens running around.)

Wasn’t really feeling this issue. It may have been all the rhyming. Or that it was more of a story about Lila Cheney and not about Carol. Perhaps a little about Carol and how she’s a sucker for Tic and also for romance.

Which makes me assume that the letter Lila gave her at the end was from Rhodey. (Or perhaps from Kit, who she’d also jet back to NYC for.)

DeConnick was clearly playing with tropes around marriage and ideas about marriage in this world where Prince Yan cannot be king without being married. And then Carol must save him from marrying Marlo of Sleen, who’s not a very nice person.

Interesting to know that Tic doesn’t have a long lifespan. Well, she’s certainly going for trying to do everything in it, even if her marriage to Prince Yan is just for politics.

Get all the Flerken and buy Captain Marvel Volume 2: Stay Fly