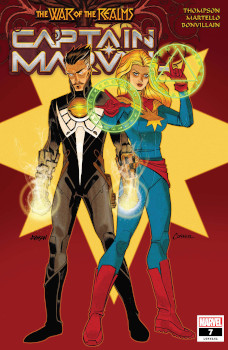 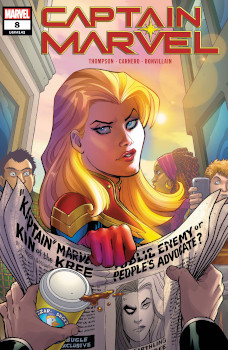 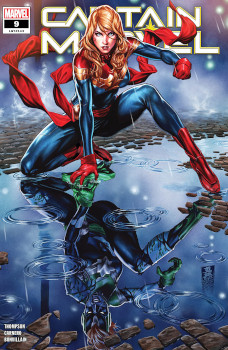 Yawn, this crossover remains pretty boring. The only entertaining part was the background antics of Black Widow versus crocodile. That was amusing.

I didn’t care about Carol and Stephen learning about to how to be comfortable in each other’s bodies and playing on their own strengths regardless. Oh, no one is surprised that they defeated the Enchantress. It also doesn’t help that I’m not a fan of zombies.

The art was okay. I feel that Martello has lots of potential, and I do hope to see them on other books in the future. This just wasn’t my favorite storyline or crossover event.

So I accidentally read #9 before this issue. I was confused. But I’m still confused. Apparently, there was an entire trade paperback where Carol goes to take care of her mother and learns her mother is half-Kree. I’m sure it was very emotional and all, but this the problem of the direct market. This is the problem when I had no idea that a Captain Marvel stand-alone book was coming out, and now it’s in this comic issue.

Good things: I like Carnero’s art. They’re one of the people who know about fashion, and who make women look different on the page from one another. This is helpful since this Star character looks identical to Carol. So much so that I’m shocked Jess or Carol didn’t point it out.

I’m always a fan of Carol’s friends rallying behind her. I still think Rhodey is her beard. Like Carol is so not straight and Marvel/Disney needs to figure that out.

The losing powers part made me cold. Mostly because we had this with Nuclear Man in the last storyline, and in DeConnick’s famous books, Carol also had her powers affected. It reads like a recycled plot for me.

The xenophobic exploration of Carol losing her status with the military and the public when she’s outed as half-Kree, it doesn’t go far enough. Feels like a cheap coming out plot.

Because I’ve read the next issue, Carol and Minn-erva on the beach made even less sense.

So…Minn-erva’s dead body…yeah, must be something about Star as she’s either a complete red herring or the baddie.

More Agent Brand. More Agent Brand, this is my request. She can dump Beast and date Carol. The whole talking about how Rhodey is hot rang hollow. Especially since we barely saw his chest and abs.

These creatures seem to be far more developed than they’ve been in these issues. It still feels like I’m missing the plot. (Even though I went back and read #8 before writing this review.) The ending, especially, and Carol’s ongoing loss of powers is still boring.

I did, however, like Carol’s Batcave. It was pretty sweet. I’m just disappointed that Jess didn’t call it a Batcave since this is a Marvel book, not a DC one. Tony’s flying car made me miss when She-Hulk had a flying convertible that she used to drive to court or to see her boyfriend Wyatt in Oklahoma.